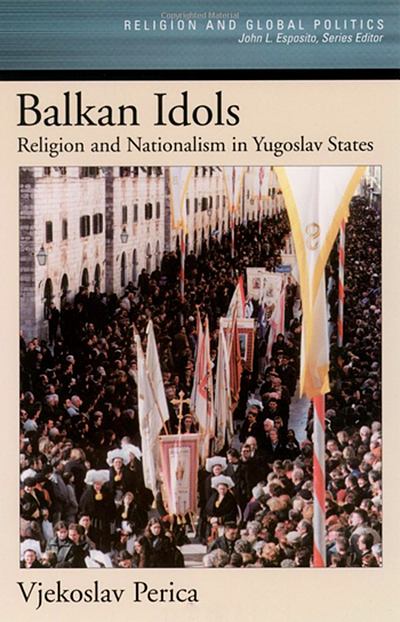 5 “the nation state cannot exist without an adequate system of public patriotic worship, symbol, myth, and ritual. Nation states also cannot exist without history and myth, which also require worshipful acceptance.” The origin myth “becomes sacred; that is to say, historical narrative becomes religion rather than history based on evidence.” The difference between Serbs, Croats, and Bosnian Muslims “is not religion but the myth of national origin, which is consecrated by native religious institutions.”

Michael B. Petrovich: Historically, religion here is less a matter of private conscience but rather of public identity. ‘Identification between religion and nationality’ sometimes meant that religious conversion results in a change in nationality.

6 Srdjan Vrcan: ‘there exists a rather strong correlation between religious affiliation, commitment to religion and involvement in the church on one side and nationality on the other.’

9 Ethnicization of Catholicism in Croatia only started in the 19th century. Fewer native saints.

11 Until Austrian rule, Muslims were under the Ottoman religious authority, did not have their own religious organization.

13 There were 4 mainstream religions and some 40 religious minorities in 2nd Yugoslavia, the biggest of which were the Evangelicals (seat and most members in Croatia), Jews, Calvinists (Vojvodina), Baptists (Croatia), Jehova’s Witnesses, etc.

15 Serbian Orthodox and Croatian Catholic clergy cooperated best when under a foreign threat.

Unlike in Western and Central Europe, no large-scale interfaith conflicts occurred in this area, though various incidents and tensions have.

42 Catholic Church was the largest, wealthiest, and best organized.

Yugoslav state did not receive legitimation from the Serbian Orthodox or Croatian Catholic churches, both of which served as guardians of their respective ethnic communities and as pillars of domestic opposition.

63 “After the collapse of the Croatian (secular) nationalist movement [in 1971], the Church became the only driving force of Croatian ethnic nationalism. Many nationalist leaders recognized the Church’s leadership and became practicing Catholics.”

74-80 Islamic Community in SFRY, the Muslim religious organization (and its representatives):

1968: “Muslim” recognized as a nationality on par with other constituent nations.

85 Islam became most visible in 1989-1991, with religious festivals, as part of the community’s response to growing nationalisms.

86 June 1990: first Muslim nationalist text since Tito’s death published in Preporod newspaper, describing a Muslim as “a schizophrenic creature” and quoting Mehmed Selimović: “Bosnians belong to no one. Settled in the middle of a crossroad, we were always being given to someone as a dowry.”

92 “No other phenomenon better symbolized the pride, elan, and relative prosperity of Tito’s Yugoslavia than internationally recognized Yugoslav sports.”

All employees and retirees donated 2.5% of income for 4 years for the Olympics and 1.5M people made one-time donations.

In 1982, Yugoslavia was 10th in the world in international competitions output (medals).

Tito’s resistance became recognized as one of the most successful local movements in WWII. Went from 40K in 1941 to 350K in Summer 1944 to 800K in May 1945, organized in People’s Liberation Committees and including ethnic minorities, with broad popular support.

98 NOB myth was fused with Tito’s victory over Stalin, both thanks to brotherhood and unity.

99 Non-alignment, self-management, and brotherhood and unity “became pillars of the new nation” and “facilitated…the nation’s sense of exceptionalism.”

100 Yugoslavism wasn’t a new national identity but rather it “entailed the idea of necessity as well as fruitfulness of “fraternal” relations among several distinct groups.” Emphasized diversity and distinctiveness of each nation but through education and rituals reinforced the notion that unity was better than ethnic conflict by bringing freedom, prosperity, and pride.

Tito, at LCY’s 11th Congress, on 6/20/1978: “the unity of Yugoslavia’s nations and nationalities…is the precondition of not only our prosperity but of our very survival.”

Brotherhood and unity was always contrasted as the highest patriotic value with ethnic nationalism.

101-102 Most people who declared themselves Yugoslav rejected both ethnic/national identity and especially religion (they were the most secularized), while professing faith in the civil religion.

117-122 [Great summary and analysis of the Medjugorje apparitions.]

123 Serbian church strengthened in the 1980s thanks to the escalating Kosovo crisis.

148-150 Beginning in 1984, Serbian Orthodox Church redefined Jasenovac as well as Kozara, Kragujevac, Užice, and other Partisan spomenici from memorials to anti-fascists/Partisans to memorials to Serbs killed by Ustaše, a “Yugoslav Auschwitz” for Serbs.

166 “The three largest religious organizations…were among the principal engineers of the crisis and conflict.”

“In all successor states of the former Yugoslavia, except perhaps in Slovenia, religion became the hallmark of nationhood. (…) [R]eligious organizations became co-rulers with the new regimes in all the succesor states except Milošević’s Yugoslavia.”

169 Bosnia: Izetbegovic et al were “ethnic nationalists, similar to Serbs and Croats. Religion boomed, but so did a “new” history, without which a nation cannot exist. School textbooks glorified the Ottoman era. The Bosniaks [became] a martyr-nation” i.e. victim of Croats and Serbs. Massive commemorations and reburials. Mandated use of Muslim greetings. New mosques built, others rebuilt.

173 + 176-177 Croatia: The Medjugorje apparition was added to the nation’s founding myths.

“the postcommunist Croatian nationalist regime established Catholicism as the defacto state religion and the Stepinac cult as the key patriotic symbol,” incl. a 9-ft statue in his native village and monuments in many other places, beatification

Church as the nation’s founder and “guide through history”

206 Who/what tried to save the country from falling apart:

Last waves of Yugoslav patriotism were propelled by