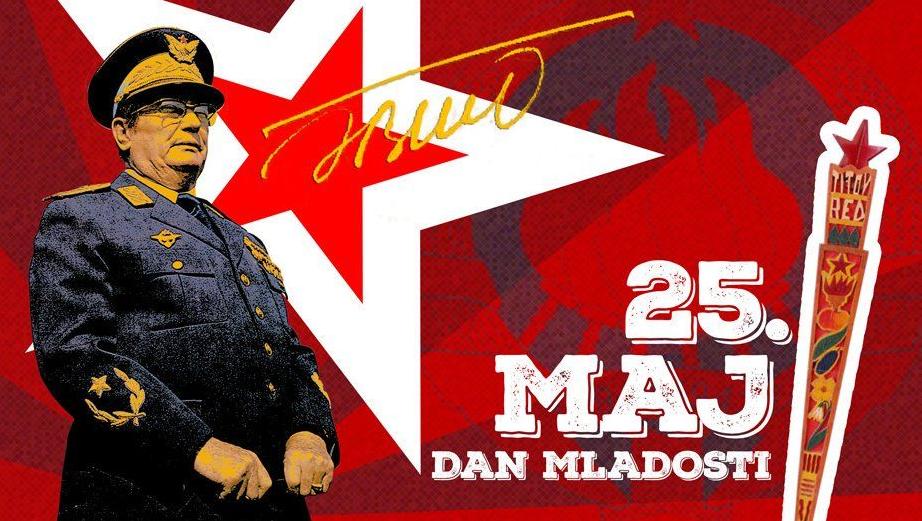 Dan Mladosti was one of the biggest holidays in SFRY and it continues to be commemorated today.

Youth Day (or Day of Youth) was celebrated on May 25 on Tito’s unofficial birthday. His real birthday was on May 7, but he changed it to the 25th to commemorate the day he escaped the 1944 attack by Nazi Germany at Drvar.

The holiday was first celebrated as Tito’s birthday, but in 1957, when he “recognized, in his own way that the cult of personality in Yugoslavia…was outdated” [Pirjevec, Tito and His Comrades, p. 270] he changed it to the holiday of youth. Youth Day was celebrated until 1987, when it was the first all-Yugoslav holiday to be discarded.

NB: Information in this section is primarily from Videkanic, Bojana. “First and Last Emperor: Representations of the President, Bodies of the Youth.” In: Remembering Utopia: The Culture of Everyday Life in Socialist Yugoslavia, Washington, DC: New Academia Publishing, 2010, pp. 37-63 [Book notes].

Preparations started up to two months prior to the holiday:

The week before the day, schools, factories, athletic clubs and other institutions sent young people to carry the baton in the Youth Baton Relay [Štafeta mladosti] throughout the country, symbolically connecting people of all nationalities in every republic/province. Each city had a welcome committee for the baton. Concerts and other cultural events were held in honor of the relay, primary and secondary schools held the Day of the Youth Baton with events celebrating the passage of the relay baton and featuring students in their best clothes and Pioneer scarf and blue Tito cap, singing, dancing, reciting poems, and recreating historical events.

Streets were lined with people cheering the baton and carrying flowers signs. Children wore Pioneer uniforms; farmers, miners, and workers wore their best uniforms as symbols of the trade and solidarity with youth. In all, some 20,000 relay batons (primary batons, carried through the whole country all the way to Tito, and local batons, presented to local officials) were carried across Yugoslavia in the holiday’s 40-year history.

On the day itself, Tito received the baton from a youth at the official ceremony which took place at the Yugoslav National Army Stadium in Belgrade. As part of the slet, the stadium was filled with up to 10,000 children and youth, performing gymnastics in synchronized formations and creating shapes (flowers, acronyms, words, machines, flags) with their bodies; dancing; parading with guns; cheering; singing songs; shouting slogans like “We are all Tito!” There were parades with floats, parachute landings, speeches.

Day of Youth manifestations were broadcast in the media and publicized in hospitals, factories, and schools with posters and announcements. Tito was emblazoned on flags, portraits, paintings, and banners, typically large in scale and placed in central public locations.

All of it was broadcast on TV to more viewers than the Olympic Games and documented in TV shows, news reports, photographs, and books. In later years, the celebrations mixed events like dances, rock concerts, multimedia presentations and with Westernized media events. It was more like entertainment than propaganda.

In addition to the central celebration, with Tito in Belgrade, there were festivities in each republic, with local politicians.

“The whole idea was to show how the socialist youth of Yugoslavia would devotedly follow Tito’s revolutionary path. But this was also the way to tie the president’s aging image to the metaphor of eternal youth. Combining the Olympic disciplines of relay race and marathon was intentional. Every new custom had to fulfill two functions: draw on tradition, and point to the future. This newly created procession would unite the ancient humanistic ideals with the values of the new system, giving false depth and tradition to a system that, in terms of history, was born yesterday. It was like growing a beard on a baby.” [Dragan Todorović, The Book of Revenge]

An abridged version of the live broadcast from the Day of Youth spectacle in Belgrade. rebroadcast on the Serbian TV channel RTS in the program Trezor [Safe]:

TS 2:25 – Young Pioneers sing a birthday song to Tito in “all the languages of Yugoslavia’s nations and nationalities.”

TS 8:05 – “Tito je naše sunce” [Tito Is Our Sun] song with a mass choreography portraying a sun and a heart with the letter T.

TS 35:50 – Sanije Hiseni carries the Youth Relay baton into the stadium, hands it over to Tito with a speech and birtday wish in Albanian and in Serbo-Croatian.

After Tito dies, the relay baton went straight to the burial place.

In Belgrade, a performance by Lepa Brena of “Živela Jugoslavija” (Long Live Yugoslavia).

In 1987, Neue Slowenische Kunst submitted a proposal for the Day of the Youth poster, which was ultimately chosen and published in the national press. But it soon emerged that the design mimicked The Third Reich, a 1936 painting by Richard Klein. The design was pulled, but not before highlighting issues with the holiday and the regime/ideology itself and launching a debate of the holiday’s validity. 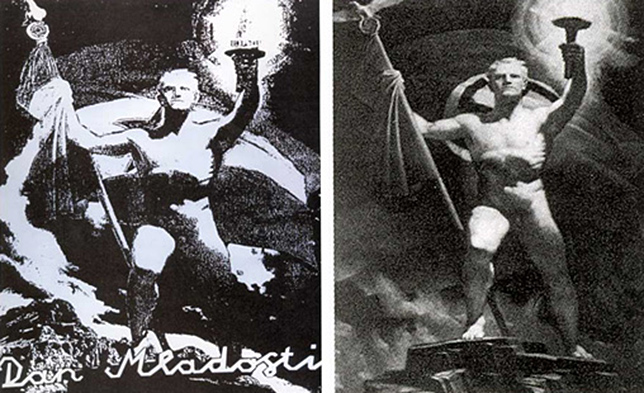 Performance of one song:

Following a two-year hiatus, the General Consulate of SFRJ organized another “traditional” commemoration of Youth Day, with music, dancing, and delivery of a relay baton.

“One can say today everything is the opposite of what the holiday used to symbolize.

Head of the General Consulate of SFRY, Mar­ko Per­ko­vić said:

Head of the Podgorica chapter of the People’s Party (DNP), Jovo Pejović, said it would be good today to have a day young people could mark with play and fun, but it would end up being ideologically colored, which is not good. He added that whatever is tied to individual personalities cannot withstand a test of time and that sometimes misleading people is good if the aim is something positive.

The “MAC-MC Lojd” from Sutomore organized a Youth Day celebration, including fireworks. The outfit’s leader Ivan Zanković said in a statement, “We are organizing due to the respectable character of SFRY, to the true respect for the idea of ​​”Yugoslavism,” and to a credible community based on the foundations of “socialist organization” and “brotherhood and unity”, which were the basic values ​​and sights of the former SFRY.”

A ceremony was held on Magnolia Square, drawing a large number of Yugonostalgics. Songs were sung, including the one below, a band and DJs played music, and at the end 122 fireworks were shot in honor of Tito’s 122nd birthday. A 21-year-old local construction worker delivered the relay baton to the stage; the relay had been carried through Montenegro in stealth so as not to violate the pre-election campaigning moratorium.

In addition to all aforementioned: