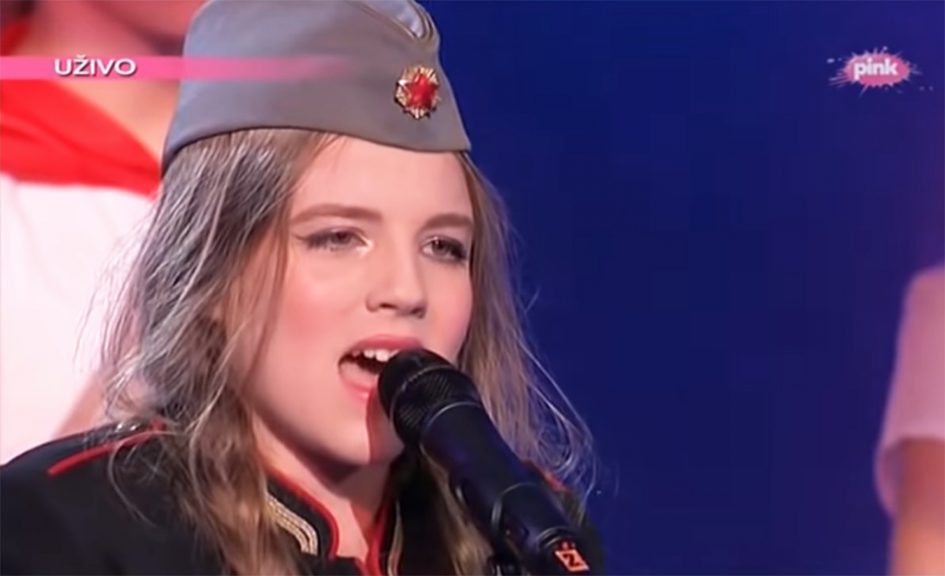 Pinkove zvezdice is an American Idol-like program of the Serbian TV Pink in which children perform. One of the stars of recent years is Katarina Radulović.

Though she has sung over 20 songs since October 2016, the ones that receive the most press, positive reactions from the audience, and straight-up fame, are associated with the former Yugoslavia.

In the semi-final of the third season of Pinkove zvezdice, in June 2017, Radulović performed a famous Đorđe Balašević song “Računajte na nas.”

In 2018, Radulović later performed the song at Tjenište, during the 75th anniversary commemoration of the Battle of Sutjeska.

The music part of the program was concluded by Katarina Radulović, a pupil of the Sutjeska Primary School in Podgorica. She performed the song “Count on Us” to the tremendous applause of many visitors. The echo lingered in Tjentište for a long time.

Earlier in 2018, Radulović had performed a Đorđe Balašević song, “Just So There Is No War,” at the ceremonial academy and laying of wreaths at the Partisan Monument in Gorica, the hill that gave the name to Podgorica:

In the first 2019 episode of Pinkove zvjezdice, Radulović began the performance of the song “Yugo” by the band Rock Partizani with the original newly-composed folk song “Od Vardara do Triglava.” Because the assignment was “1970s and 1980s Rock” and the main song was from 2008, she lost some points, albeit not enough to be terminated. The set, however, was definitely anchored in the required period.

Radulović shared and described the performance on her Facebook page:

“The introductory number “From Vardar to Triglav” is an unofficial anthem of [Yugoslavia], which found itself in the mix because of the text and the atmosphere it evokes. The only purpose of the whole show is nostalgia, a reminder of the historical moment, the evocation of memories at that time. The song is a version of the one played by the band Rock Partizani. (…) Without the past there is no future.”

When I sang “Računajte na nas” around Montenegro, I experienced hugs, applause, warm words, praise, and often tears. (…) that’s why I wanted to dedicate my song in this round to those who still have Yugoslavia in their heart. I was born long after her birth and disappearance. I learn about this time at at school, from my parents. I learn that we have to know and respect our history!

“The relay baton and the flags are from Tivat, loaned by Marko Perkovic, of the General Consulate of SFRY…”

“Hey Yugoslavs, get ready… I can’t love Yugoslavia more than those of you who experienced it, but I can keep my promise to the people I met at the Sutjeska Battle anniversary ceremony.”