Massacre of the Present 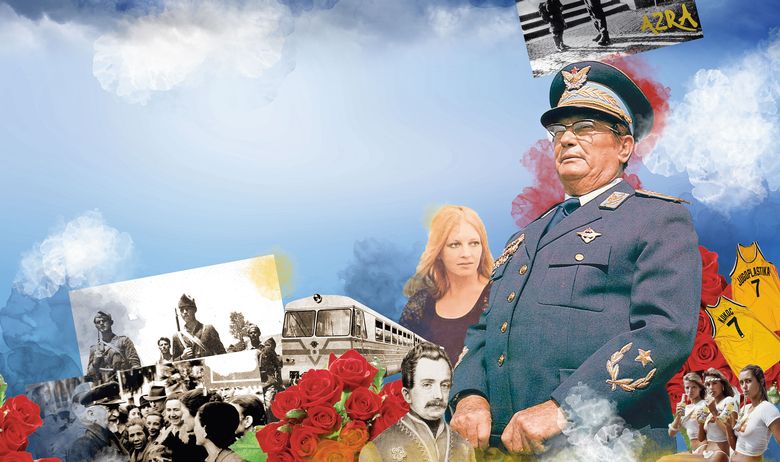 [Voices opposing official anti-Yugoslavia rhetoric, of course exist in Croatia. Translation of essay extracts by me with the help of Google Translate.]

Croatia benefited the most from Yugoslavia! The ruling ideology maintains the myth that [Yugoslavia] was a denial of Croatian identity, but the truth is exactly the opposite.

Regardless of who has been in power since 1990, the Republic of Croatia has had a single, dominant and dominant ideology: clerical nationalism.

Like any ideology, it does not consider itself to be an ideology, but a natural, common sense state. Its program documents, starting from the Declaration of Homeland War, are not ideological documents, but a testimony of the truth. Its historiographic myths, from Stepinac to Praljak, are not myths, but self-explanatory values. One who doubles or denies that “truth” is not only an ideological opponent, but also excludes oneself from the term “Croat.” For “Croat” for this ideology is not a matter of citizenship or ethnicity but that of belonging to ideology and loyalty to identity markers. Those who do not identify with them, who think differently, are therefore not “Croats” but “Yugoslavs.”

When it comes to Yugoslavia, the ideology operates with unquestionable narratives: Yugoslavia was and remains an artificial creation; she was and remains a blend of irreducible cultures with irreconcilable differences; she was, directly or indirectly, invented by the Versailles powers; she was created by the Serbs because it was in their interest; she was a negation of Croatian interest and identity, and Croatia was enslaved, economically and culturally backward.

The anti-Yugoslavia narrative runs into its stubborn opposite. Yugoslavia did not originate in 1918, but at that moment as a cultural project had been many centuries old already. Croats owe to Yugoslavia their common štokavian dialect, because without the Illyrian idea, the kajkavian and čakavian dialects would have separate standards. Yugoslavian people were not so different, sharing a common cultural substrate, from dialects to the hajduk mythologie, from old songs to sarma…

Yugoslavia as a political idea was invented by the Croats. The Croats, from Supilo and Trumbic to Tito, were her political executors. The Croats, from the Dalmatian partisans to Ante Markovic, were often her most fierce defenders. The three Croats, Mestrovic, Kljakovic and Krizanic, created the image and brand of Yugoslavia. Tito and Krleža formulated her ideology and cultural policy.

Croatia profited the most from Yugoslavia because it integrated nationally, united territorially, and escaped from the position of a colonially inferior country. In the period of Yugoslavia, Croatia for the first time ceased to be a passive dominion, an “African” colony for resource extraction, and became a technological, industrial, and trading leader. During the period of Yugoslavia, it experienced a modernization jump during which the 90-percent agricultural land turned into a nation capable of producing radios, TVs, plastics, hydroelectric power, computers, nuclear energy.

Yugoslavia was the only period of Croatian history when Croatian culture was relevant in the world. [List of examples ensues.] And all this went hand in hand with unquestionable repression, serious human rights violations, and in the shadow of a grotesque, operatic cult of personality. (…) The second Yugoslavia cannot be reduced to ideological simplification and stereotypes. The discourse about Yugoslavia can only be fair if it is polyphonic, contradictory and if it does not pretend to be a simplistic, comprehensive “truth.”

The anti-Yugoslavs and Yugoslavs must agree on one fact: namely, Yugoslavia existed. She existed and left some traces: from Mestrovic’s monuments in Zagreb and Split to the socialist housing construction of the 1960s; from the Adriatic highway to the štokavian literary standard; from Bulajić’s war spectacles to children’s clinics; from the women’s right to vote to Azra’s albums; from the stadium in Poljud to Goli Otok; from the miracle of Yugoslav basketball to UDBA executions; from Podravka and Končar to Istrian foibas; from empty villages to Vegeta; from Bajadera [dessert] to Jadrolinija’s ferries.

The anti-Yugoslavs and Yugoslavs of course agree that Yugoslavia existed. What they disagree about is whether it was good or bad. And in this discussion, they resort to the most random of all intellectual methods: creating fictitious, alternate histories of what would have happened if this or that had or hadn’t happened.

What would have happened in 1918 if the “geese in the fog” had not gone to Belgrade? If Cvetković and Maček had not been eliminated? Had Maček accepted the German offer to lead the NDH? Had Tito been killed in Sutjeska? Had 1948 not happened? Had the 1990s? Would, as in the utopia / dystopia of Mark Vidojkovic, the SFRY been a technological force? Would it have been ruled by Draža and Chetniks? Would she be a Russian satellite? Would she join the European Community in 1992? Would 11,000 women today work in Jugoplastica? Would Hajduk then have been what Dinamo is today? Or vice versa? Would the SFRY defeat the Dream Team in basketball in Barcelona in ’92? Would Yugoslavia be immune to deindustrialization, globalization, China?

I can’t discuss what did not happen when there is all that did happen. But if there is a history that has happened, and if during that history Yugoslavia created and impressive track record, how are we to put that into perspective? Should we pretend that this legacy does not exist? Should it be treated like herpes or should it be understood as an integral, constituent part of what we are today? Should identity be equated with an imaginary Croatia that never existed? Or with the one that is historically factual, and in which we live?

Combating this heritage is not only culturally damaging and politically shallow, but above all, completely in vain. In some parallel life you can [negate everything Yugoslavian or from that era]. But even if you do all this, what then? Are you going to rename the football clubs, kill the musicians, demolish housing developments, close the factories?