Nostalgia: Origins and Ends of an Unenlightened Disease 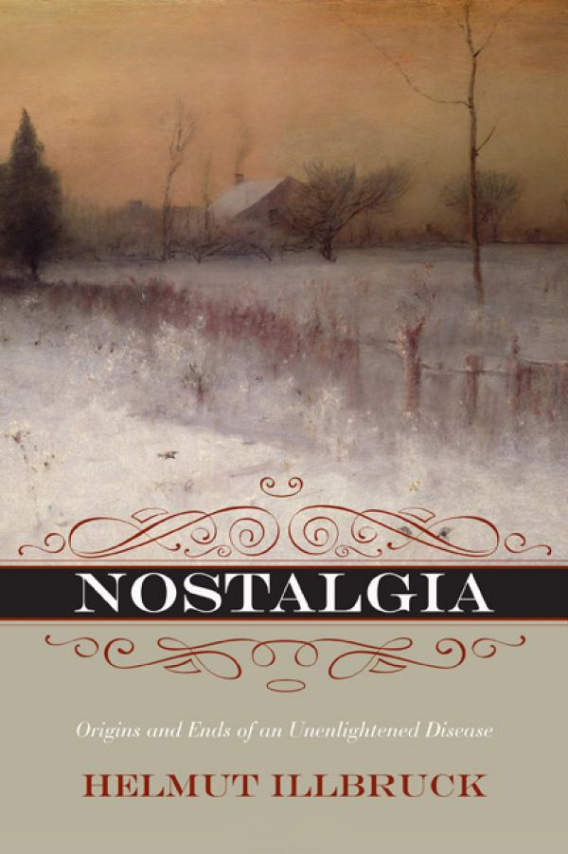 3 Johannes Hofer, Dissertatio Medica de Nostalgia, 1688: ‘Nostalgia admits no remedy other than a return to the homeland.’

17 “…the question of whether the disease is a matter of memory or of the imagination. Must there be a prior cause, a home our memory rescues as indisputably real and true which when lost then instigates the painful desire of pothos [per Plato, longing for what is elsewhere or absent, as opposed to himeros, a desire for something that is present]. Or does the need and the longing create the imaginative idea of a permanent and irreplaceable home according to its present lack and desire?”

21 Quoting Soren Kierkegaard, Either/Or, Ed. And trans. Howard V Hong and Edna H. Hong, Princeton, NJ: Princeton University Press, 1987: ‘For me nothing is more dangerous than to recollect. As soon as I have recollected a life relationship, that relationship has ceased to exist. It is said that absence makes the heart grow fonder. That is very true but it becomes fonder in a purely poetic way.To live in a recollection is the most perfect life imaginable; recollection is more richly satisfying than all actuality, and it has a security that no actuality possesses. A recollected life relationship has already passed into eternity and has no temporal interest anymore.’

22 “The passage reflects that recollection can be more satisfying than actuality only because it secures the object of longing into a realm safe from change and in which the object carries no temporal interest anymore.”

23 Marshall Berman sees nostalgia as ‘a symptom of the cultural failure of a modernity that has lost the power to give meaning to itself or to people’s lives.’

[Yugonostalgia, like other nostalgias for socialism era, is a symptom of the failure of the new era and countries to provide people with meaning.]

42 Hofer: nostalgia as a local “disease of the imagination”

“[Hofer’s] central thesis is that nostalgia is ‘symptomatic of an afflicted imagination’, not, of a disturbed memory.”

59 Nostalgia for Hofer is “an imaginative appetite which, lacking that which it desires, turns upon itself, seeking solace in the established supply of the brain’s imagination only.”

60 Hofer: nostalgia is an ‘excessive agitation of the imagination’

61 Hofer: ‘nothing creates a stronger impression than the desire recalling the homeland’

62 Hofer: ‘nostalgia is a waking dream’

63 Hofer: ‘strength of the imagination alone’ is the sole cause of nostalgia

weakness/disease emerges because “for a nostalgic the power of his imagination becomes too overpowering, or…his mind is too weak to accommodate that power.”

127 Kant: the imagined homecoming is impossible and the shock of recognition of that impossibility is a curing insight

“nostalgia only amounts to a longing for…childishness, one to be overcome by the step into maturity.”

The argument is directed “against the delusory and self-deceiving hope of finding a firm footing in a particular place imagined as a shelter from historical change.”

131 “Kant’s argument against nostalgia as an ultimately groundless deception or a sick man’s mere dream.”

Quoting Kant, Anthropology from a Pragmatic Point of View, 1798: [nostalgia] ‘…is the effect of a longing that is aroused by the recollection of a carefree life and neighborly company in their youth, a longing for the places where they enjoyed the very simple pleasures of life….the fact is they cannot bring back their youth with them.’

“…what we truly long for remains forever beyond our reach…”

134 Kant: nostalgia depends on the ‘nostalgic’s actual sense of belonging to a particular place as conveyed by the sensible material at his disposal, if only through his memory.’

137 “Where the longed-for home becomes a mere metaphor, the meaning of nostalgia is itself transformed from an insufferable disease into an itself desirable and positive longing to indulge in, to compensate for the fear of no longer knowing a place that without any reservations might qualify as home…[M]odern nostalgia can become an even more speculative eros ready to attach itself to ever more ideal and metaphysical places.”

139 Schopenhauer: ‘time deceives us by wearing the mask of space.’ We believe we long for a certain place when if fact we long for the time we spent there while being ‘younger and fresher…If we travel to the place, we shall become aware of the deception.’

[It is impossible to travel to Yugoslavia, which no longer exists, plus people live in the same spot except it’s a different country. Do people become aware of the deception?]

141 Schopenhauer: childhood as a ‘continuous poem’

144 “…what remains of nostalgia…is the insistence on, and yearning for, a sense of place.”

145 “Heimweh ohne Heimat (homesickness without home [quoted from Joseph von Eichendorff]) rather aptly delineates nostalgia’s…move into vagueness, its vagueness being not least a condition for keeping the sentiment alive.”

152 “For…late romantic nostalgia…the distant home the romantic dreams of can remain magical only for as long as it remains distant.”

159 “…Heimweh needs a shield, not against the lure of a once present but now distant home but for the self, or rather a self at risk of losing itself.”

164 Hegel: there is a ‘possible link between mania and nostalgia, as an inability or voluntary refusal to reconcile oneself to the present.’

225 “nostalgia’s oscillation between Heimweh and Fernweh”

227 quoting Nietzsche, Kritische Studienausgabe, 1885: ‘…the most fundamental kind of…nostalgia there has ever been: the longing for the best that ever existed.’

233 quoting Ernest Bloch, Principle of Hope: ‘there arises in the world something which shines into the childhood of all an in which no one has yet been: homeland.’

250 “…nostalgia calls for a repetition of an end that is more than a simple return, even if that end has yet never been a concrete present.”