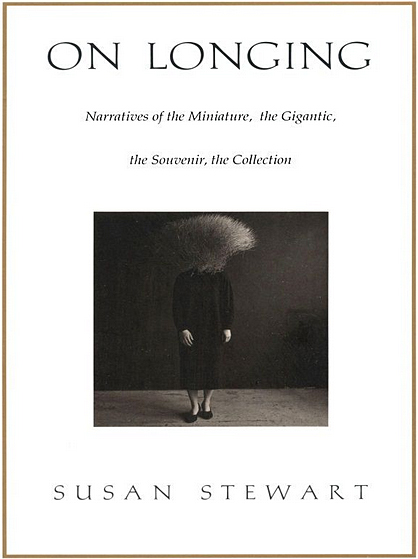 Stewart, Susan. On Longing: Narratives of the Miniature, the Gigantic, the Souvenir, the Collection. Durham, NC: Duke University Press, 1993.

23 “By the narrative process of nostalgic reconstruction the present is denied and the past takes on an authenticity of being, an authenticity which, ironically, it can achieve only through narrative.”

“Nostalgia is a sadness without an object, a sadness which creates a longing that of necessity is inauthentic because it does not take part in lived experience. Rather, it remains behind and before that experience. Nostalgia, like any form of narrative, is always ideological: the past it seeks has never existed except as narrative, and hence, always absent, that past continually threatens to reproduce itself as a felt lack. Hostile to history and its invisible origins, and yet longing for an impossibly pure context of lived experience at a place of origin, nostalgia wears a distinctly utopian face, a face that turns toward a future-past, a past which has only ideological reality. This point of desire which the nostalgic seeks is in fact the absence that is the very generating mechanism of desire…the realization of reunion imagined by the nostalgic is a narrative utopia that works only by virtue of its partiality, its lack of fixity and closure: nostalgia is the desire for desire.”

56 “The toy is the physical embodiment of the fiction: it is a device for fantasy, a point of beginning for narrative.”

57 “The beginning of narrative time here is not an extension of the time of everyday life; it is the beginning of an entirely new temporal world, a fantasy world parallel to (and hence never intersecting) the world of everyday reality.”

65 “The miniature does not attach itself to lived historical time….the metaphoric world of the miniature makes everyday life absolutely anterior and exterior to itself. The reduction in scale which the miniature presents skews the time and space relations of the everyday lifeworld, and as an object consumed, the miniature finds its “use value” transformed into the infinite time of reverie.”

[In adulthood, when toy becomes a relic or miniature, a layer of nostalgic meaning is added to it. A nostalgia for childhood.]

69 “The miniature, linked to nostalgic versions of childhood and history, presents a diminutive, and thereby manipulatable, version of experience, a version which is domesticated and protected from contamination.”

90 “The reduction of the individual viewer in the face of the public monument…and the individual’s prostration before history and authority.”

102 “…the gigantic envelops us, but is inaccessible to lived experience.”

“The gigantic, occurring in transcended space, a space above, analogously mirrors the abstraction of institutions…of religion, the state…”

138 “The photograph as souvenir is a logical extension of the pressed flower, the preservation of an instant in time through a reduction of physical dimensions and a corresponding increase in significance supplied by means of narrative. For the narration of the photographs will itself become an object of nostalgia.

“…the souvenir as calendar.”

139 “The double function of the souvenir is to authenticate a past or otherwise remote experience, and, at the same time, to discredit the present.

140 “The antique as souvenir always bears the burden of nostalgia for experience impossibly distant in time: the experience of the family, the village, the firsthand community.”

145 “The souvenir is used most often to evoke a voluntary memory of childhood… This childhood is not a childhood as lived; it is a childhood voluntarily remembered, a childhood manufactured from its material survivals. Thus it is a collage made of presents rather than a reawakening of a past. As in an album of photographs or a collection of antiquarian relics, the past is constructed from a set of presently existing pieces. There is no continuous identity between these objects and their referents, Only the act of memory constitutes their resemblance. And it is in this gap between resemblance and identity that nostalgic desire arises. The nostalgic is enamored of distance, not of the referent itself. Nostalgia cannot be sustained without loss. For the nostalgic to reach his or her goal of closing the gape between resemblance and identity, lived experience would have to take place, an erasure of the gap between sign and signified, an experience which would cancel out the desire that is nostalgia’s reason for existence.”

150 “The souvenir must be removed from its context in order to serve as a trace of it, but it must also be restored through narrative and/or reverie. What is restored is…an imaginary context of origin whose chief subject is a projection of the possessor’s childhood….the restoration of the souvenir is a conservative idealization of the past and the distance for the purposes of a present ideology.”

151 “The souvenir involves the displacement of attention into the past….its function is to envelop the present within the past. The place of origin must remain unavailable in order for desire to be generated.

157 “For the environment to be an extension of the self, it is necessary not to act upon and transform it, but to declare its essential emptiness by filling it….this filling in is a matter of ornamentation and presentation in which the interior is both a model and a projection of self-fashioning.”