Past for the Eyes 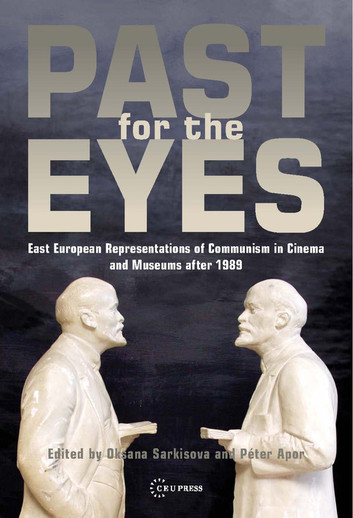 Sarkisova, Oksana, and Péter Apor. Past for the Eyes: East European Representations of Communism in Cinema and Museums after 1989. Budapest: Central European University Press, 2008

Apor, Péter and Oksana Sarkisova. “Introduction: The Futures of the Past.”

ix-x “If one recollects the strange but characteristic obsession with obscure relics of the recent past, such as communist medals or images of the “great leaders,” as well as the frenzy of demolishing old statues and erecting new monuments or the mushrooming of peculiar museums dedicated to the terror of a dictatorship,6 the conclusion that physical objects play a significant role in the relationship of the present to the recent past becomes obvious. The museums of classical historicism—where the value of the exhibited objects derived from the fact that they were able to authentically represent and preserve the meaning of the past—tangibly demonstrated the origins of nations in the past and their unbroken historical continuity since. It is precisely this “touch of the real” that makes historical exhibitions so attractive for many variants of the politics of history and memory. The relationship of the present to its recent past—or pasts—is generated through a peculiar practical activity concerned with the construction and destruction of things. Many of the museums representing Communism are either the actual result of, or closely connected to, resolutely articulated politics of commemoration. Museums, which are able to re-present the past, that is to say to make the past once again present, are perfect devices to fulfill the function of commemorations, to serve as “connective structures” towards history.”

Dakovic, Nevena. “Out of the Past Memories and Nostalgia in (Post-)Yugoslav Cinema.”

117-118 “cinema is able both to create a persuasive master narrative and to rewrite it, by revealing the hidden, elusive, latent meanings that cannot be expressed in any other way. In other words, cinema is imbued [Naomi Greene. Landscapes of Loss: The National Past in Postwar French Cinema. Princeton: Princeton University Press, 1999] ‘with a particular sensitivity to groundswells of feelings and to changing sensibilities’ and thus ‘films also lend themselves to the expression of sentiments that have yet to assume verbal form, or that resent clear articulation.’ This sensitivity allows combinations of documentary and fiction to function as agents of nostalgia; signifiers of memory, emotions and the past; expressions of Zeitgeist or Weltanschauung; genre constituents or bearers of new meanings. Their manifold effects include the re-evaluation of the past, the correction of official public and collective history through metaphorical and symbolic restructuring, the emphasis on the repetitive model of events and the circular temporal regime, as well as the mapping of nostalgic individual and private remembrance.”

119 “Films that try to “come to terms” with the socialist past, I would argue, follow the model of “historiographic metafiction.” The notion of historiographic metafiction refers to works which consciously problematize the making of fiction and history, posing questions about whose “truth” prevails, and exploring ways in which we can distinguish the past from the present.”

133 Frederik Jameson: “nostalgia films differ from broadly defined historical films in that they do not ‘reinvent a picture of the past in its lived totality’; they do not reconstruct the past but rather invent ‘the feel and shape of characteristics of art objects’ in order to evoke feelings of the past.”

134-5 “Nostalgia as an elusive sentiment includes the Fitzgeraldian fêlure: an eternal open wound, pain over a desire that cannot be fulfilled or realized. The desire is related to the past in diverse ways—it is for the object from the past; for (re)living another time; for paradise lost. The fulfillment of desire is relegated to the past or is obstructed during the narrative by the merciless flow of time, which becomes the universal obstacle. The heroes (like the audience) cannot stop or reverse the flow of time or alter the past events and thus have to face the lack of fulfilled desires from/of/for the past. Nostalgia is nurtured by the sense of irrecoverable loss that is experienced as time goes by and that makes us constantly run away from the present into the past…”

“The revival of the past—through narrative (flashback), style, documentary interventions—changes nostalgia. The nostalgic sentiment is intensified as the relived past forces us once again to (re)experience the loss. It is weakened, as the ability to relive golden moments partially redeems the emotion of loss. Finally, it is multiplied: nostalgia for the past is complemented by nostalgia for the created memories of that past, as experienced and “relived” through the “original” and its “representation” in a process which erases the differences between (real) memories of the past, fictional memories and memories of the fiction.”

Jacqueline Simon “claims that the nostalgia for the past as relived through texts of popular culture (and constructed memories) is a secondary feeling which is not the same as the primary experience. The second time round one feels something one knew the first time and now recognizes and the second experience leaves a feeling of déjà vu. The partially recognized and satisfied desire generates further nostalgic longing.”

137 “In pre-1992 Yugoslavia, the series Unpicked Strawberries [Grlom za jagode] was a rare example of the nostalgia genre. It is oriented towards personal, intimate lives and the loci of nostalgia are the 1960s, which in Yugoslavia were the moment of the breakthrough of Western popular culture.”

138-139 “Dragojević’s We Are No Angels (Mi nismo anđeli, 1992) is a paradigmatic text with its postmodernist preference for pastiche and light irony, its directors’ subscription to politique d’auteurs principles and adoration of Hollywood. It presents a wide array of quotations from teen comedy, Hawksian adventure story, musical, and action films. Non-cinematic references and allusions involve both high and low culture (Frank Zappa, Sam Peckinpah, Gabriel Garcia Marquez, Jorge Luis Borges, Thomas Mann, Barbara Sidney). Both Angels and Andrić’s subsequent films choose to ignore harsh reality; not to be concerned with war and social problems but rather to escape into the constructed world of popular culture, entertainment and Western-style images. But the very denial of and abstinence from comments upon reality is a powerful political (oppositional) stance. Withdrawal from reality into a dreamy world similar to the Yugoslav 1980s and regrets for the loss of a great and better past endow the nostalgia with a politicized tone. The generational nostalgia in post-Yugoslav and postmodern comedies is for Hollywood, for popular culture and the “glorious 1980s” of the Socialist Federal Republic of Yugoslavia that dwindled and finally vanished. The diversification of nostalgia films follows the dynamics of historical change. It is in turn politicized and depoliticized as its center moves between the 1960s and the 1980s or around Hollywood and the West.”

“the role played by cinema—in the combination of documentary and fiction—in the representation and reconstruction of the (national and other) past and history is versatile and complex, both active and passive. On the one hand the films actively examine and (re)write the collective past or national history (Underground, Dust). On the other hand, they passively write out individual, private (hi)stories through the selection and combination of ready-made elements already codified through popular culture (Unpicked Strawberries). To borrow Naomi Greene’s powerful metaphor, cinema helps us to fill the ‘landscapes of loss’ as well as to recreate the lost landscapes—collective, historical, individual, generational and emotional. The films are distinguishable according to their thematic concern with history and the public or private past, their modes of the representation ([meta]historical or metacinematic forms) and finally their genre models (historiographic metafiction, nostalgia film). Their orientation toward the examination of history resulted in the perfection of the model of historiographic metafiction (Underground or Dust). They deny the official version of history and of the past imposed by a dominant ideology striving for a (national) (hi)story that can only be told in images. As early as in The Marathon Family the interest in film history equals the interest in public history, paving the way for the full self-referentiality and postmodernism of the 1990s. The interest in private remembrances resulted in nostalgia films that try to recover the private past.”

” feeling of nostalgia accompanies every remembrance of the past, regardless of whether it is history or private past, or of how traumatic that past might be. The most private remembrances presented through pop cultural references—including documentary fiction—inevitably tackle national or public history, acquiring political references and a critical edge. The documentary footage, regardless of its brutality, is softened and nostalgically intoned by fiction. Documentaries veil the naturalistic representation of the past with “mists of regret.” Linking past and present, this inevitable nostalgia confirms the Žižekian need ‘to dream the past in order to remember the future.'”