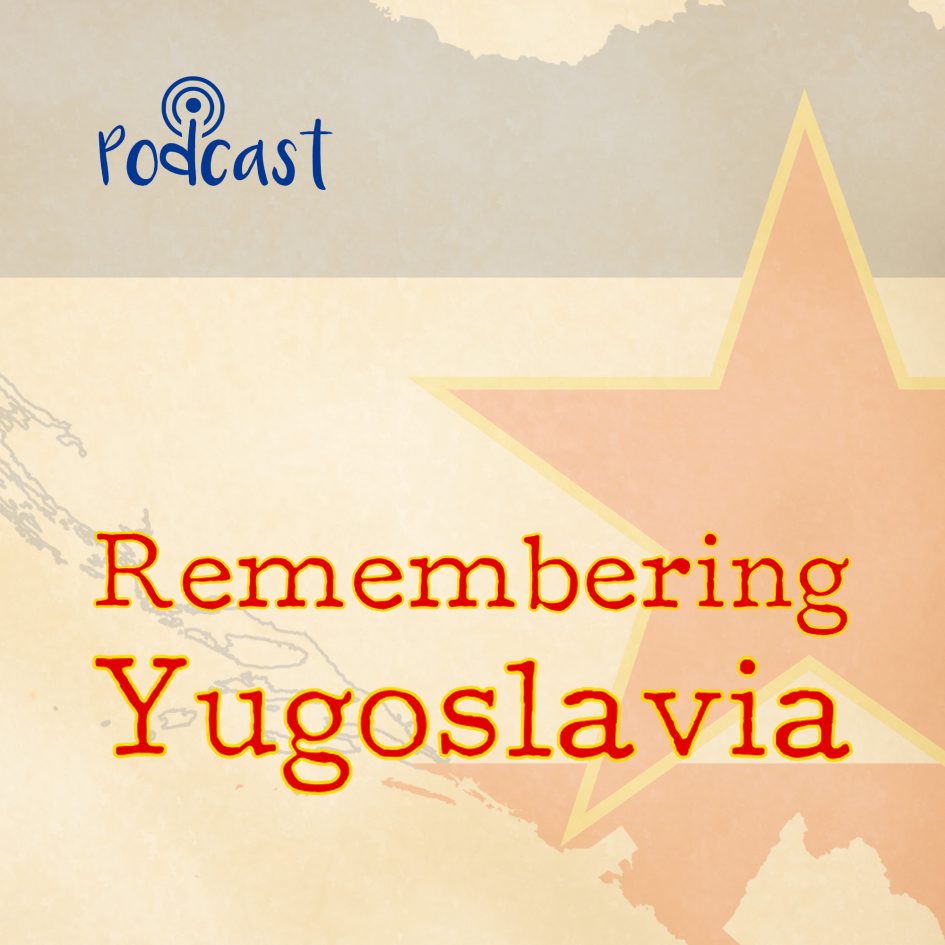 I, the creator, producer, and host of the Remembering Yugoslavia podcast, Peter Korchnak, tell the project’s origin story.

Become a monthly patron on Patreon:

Disclosure: As an Amazon Associate we earn from qualifying purchases.

PETER KORCHNAK: That was the national anthem of the Socialist Federal Republic of Yugoslavia, interrupted like the country it represented until 1991.

Growing up in socialist Czechoslovakia in the 1980’s I knew it as the Slovak patriotic song, “Hej Slováci.” I had to learn it and sing it in school, “Hej Slováci ešte naša slovenská reč žije…”, you get the picture. It’s effectively the second, unofficial anthem of Slovakia. The Slovak Lutheran pastor Samuel Tomášik wrote the lyrics in 1834 to celebrate the Slovak language and spirit, and used a traditional Polish melody to make it a song.

The song was soon adopted by other burgeoning Slavic nations, including those in Southeast Europe, as a rallying cry for Slavic unity and resistance. When Tito and his Partisans re-established Yugoslavia during World War II, as a socialist federation, they adopted “Hej, Slaveni” as the new country’s official anthem.

My name is Peter Korchnak and I come from a country that no longer exists.

Get the Podcast in Your Inbox ›

Throughout my childhood, Yugoslavia was a dream land of sunshine, beaches, and the world’s best ice cream. My family never went there on vacation. When I’d ask my parents why—why could my friend Milan and my friend Roman and so many of my friends go, some every year, and we couldn’t—they’d say they’re putting money into our family cabin and my friends don’t have a cabin and that’s where we’d spend the summer. Deep down I thought it was their way of punishing me, for what I don’t know, I always got good grades. And so Yugoslavia remained a paradise I never found.

Only many years later did I learn a much better explanation. The Communist Party-controlled authorities wouldn’t grant my parents a travel permit to Yugoslavia, a popular departure point for illegal emigration. The citizens of Czechoslovakia intent on leaving would travel there, ostensibly for vacation, and use the country’s lax border controls with the West to emigrate. Some distant relatives of both my mother’s and my father’s, uncles and aunts I think, had escaped to the U.S. years before and it was just too much of a risk.

The wars of dissolution and their aftermath in the 1990’s shuttered the area for many years. Of course, by then Yugoslavia no longer existed, and so the paradise was lost before I could dip my toes in its crystal waters.

Then, in college, Emir Kusturica’s 1995 film Underground ratcheted my latent fascination with the Balkans into a fever. The soundtrack became an obsession; I even started learning Serbo-Croatian to understand the lyrics to “Mesećina” (Moonlight). I first traveled to the region in March 1998, to Croatia with my then-girlfriend. At a conference on Central European politics in Timisoara, Romania, I befriended a bunch of Serbs, and I was hooked.

I finally caught up with Yugoslavia as a graduate student researching its disintegration as compared to Czechoslovakia’s. Over the years of studying, traveling, and making friends across the successor states—I even picked up a nickname along the way and an honorary “you’re one of us” declaration—the vanished country became something of a spiritual homeland. And, you could say, I became nostalgic for it even though I never knew it.

After a decade-long hiatus, when immigration to the U.S., love, and work occupied my attention, it was again music that revived my passion. On January 13th, 2012, I went to a concert of Krebsic Orkestar, a fourteen-member Balkan brass band in Portland, Oregon, where I lived at the time. None of the musicians were from the Balkans or had any familial connections to it. They played čočeks, they played kolo tunes, they played a sevdah song or two somehow, they played the Otpisani main theme…and, of course, they played Mesećina. Hearing the music I felt both at home and lost, and somehow, pined for the life ʻbefore’ and for the unknown disappeared country receding into the distance of Time, with capital T.

I threw myself into studying why. Why do these Americans playing the music and dancing the circle dances, feel so passionate, so nostalgic, for something they don’t know? Questions about this “nostalgia for the unknown” burned like rakija through my chest as I entered the rabbit hole. Moonlight, music, memory, nostalgia, the Balkans, Yugoslavia…it has all led to here, to this moment.

Remembering Yugoslavia is a project exploring how the citizens of Slovenia, Croatia, Bosnia and Herzegovina, Serbia, Montenegro, North Macedonia, and Kosovo remember—and imagine—the country that no longer exists. I cover—or plan to cover—a number of topics from Josip Broz Tito to architecture, to monuments, to museums, books, media, art, ephemera, products, to personal memories and recollections, using both primary research, through interviews, and travel, and secondary research, using archival materials, media and academic works.

For as long as someone remembers Yugoslavia, the paradise will live on.

This is a multimedia endeavor.

On my first trip to the countries of former Yugoslavia for this project, last fall and winter, people would inevitably ask why I’m doing this. They could understand my being from Czechoslovakia, a country that also disappeared, albeit peacefully, and in fact that’s helped in this project. I’d give a short version of what I’ve related so far. But even though my answer sufficed, deep down I felt it wasn’t the whole story. Why do this indeed? Why spend the time and treasure?

Travel comprises both an outer and an inner journey. This is the case with Remembering Yugoslavia.

To get from Podgorica, Montenegro, to Višegrad, Bosnia, I decided to take a road less traveled, crossing the border at Bobotovo Groblje, so I could stop at Tjentište to visit the Sutjeska memorial. I didn’t gas up in Montenegro thinking I’d do so on the Bosnian side, in the first town called Gacko. It turned out the crossing was only open to locals and I had to double back an hour on a narrow, shoulderless windy road. Surely I’d run out of gas. 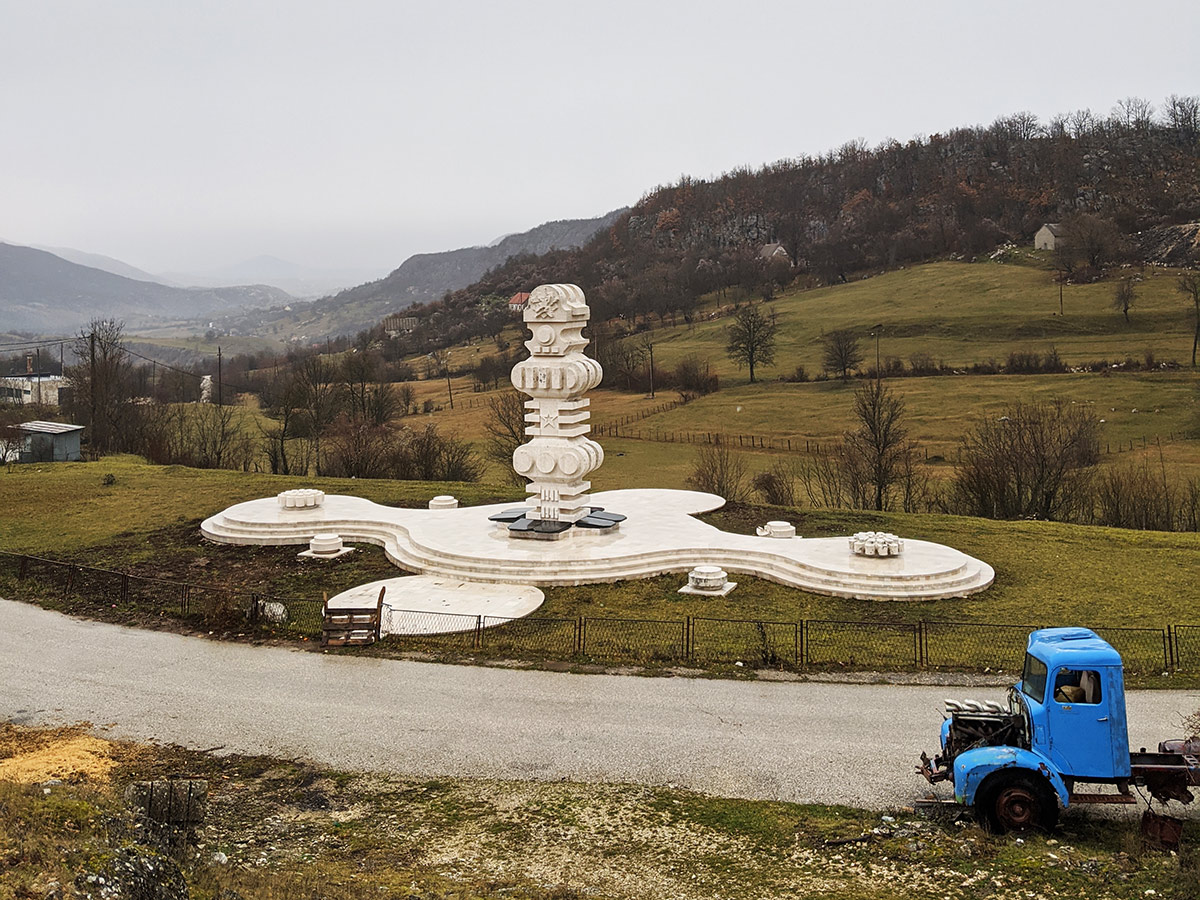 A spomenik (memorial) in Krstac, Montenegro.

In the Krstac hamlet, which comprised a handful of residences and appeared completely empty, I rang a bell and honked the car horn at the biggest house hoping to buy some gasoline. A cheerful, jolly man emerged from the house, one of those characters that seems to always be in a good mood. I told him the story, and he said yes, I always keep gasoline around the house for the generator for the winter, we have to have everything out here in the middle of nowhere. He grabbed an empty 2-liter Coca Cola bottle, filled it up with petrol from a canister, and poured it into my car. He’d worked at the thermoelectric power plan across the border for 37 years, he told me, and in the times of Yugoslavia there was no border. I tried to give him a few euros but he refused and said this is a goodwill gift from Montenegro, and may we, like Slovakia, be in the European Union soon so that again there are no borders.

I lost two hours but I gained something else.

Driving away, I flicked through the radio stations, and before a news segment on Radio Sveta Gora, a religious station, a man with a soothing preacher’s voice told a story that turned out to be essentially a parable for my own journey. At a big gathering of all animals, an ant announced he’s going to go to Jerusalem. This caused a stir and one by one, animal after animal spoke up saying it was a bad idea, the road was long and risky, filled with obstacles, challenges, and perils, and even the biggest ones of them, the elephant, the lion, wouldn’t think of going to Jerusalem, why would he, the littlest guy, want to go? Finally, it was the ant’s turn again. And he said, I know the road to Jerusalem is long and risky and full of obstacles and perils, but, he said, I want to die on the way to Jerusalem.

Get the Podcast in Your Inbox ›

PETER KORCHNAK: You can find links to all the sources and resources mentioned in this episode and learn more about this project at RememberingYugoslavia.com.