A Politics of Sorrow 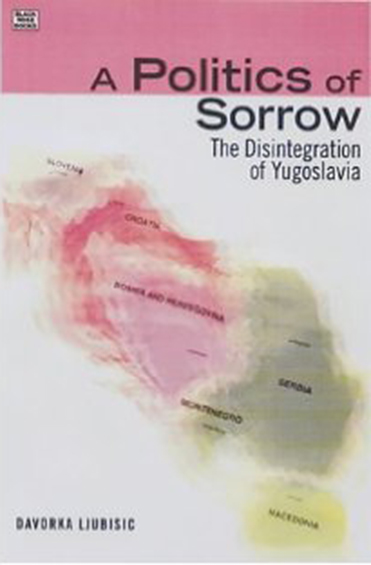 While primordialists argue YU disintegrated “because of historically rooted religious and ethnic hatreds,” constructivists say YU was an artificial imagined community and therefore not real in the first place.

xvi quoting Robert Hayden, “Imagined Communities and Real Victims: Self-Determination and Ethnic Cleansing in Yugoslavia,” American Ethnologist, Vol 23, No. 4 (1996), pp. 783-801 : ‘the disintegration of Yugoslavia…marked the failure of the imagination of a Yugoslav community.’

xvii continuing the quote: ‘extreme nationalism in the former YU has not been only a matter of imagining allegedly primordial communities, but rather of making existing heterogeneous ones unimaginable.’

The problem is that according to this logic successor states are also artificially imagined.

xx In the 1991 census, some people declared themselves as Eskimos.

“Yugoslavs, Bosnians, and Eskimos are being forced to disappear without a trace, as if these national and personal identities never existed.”

xxi “…present day refugees from Yugoslavia, more specifically from Bosnia, consider themselves to be stateless, homeless, and rightless because of the dismemberment of Yugoslavia.”

xxii “…Yugoslavia’s various nations and national minorities were increasingly intermingling and…its people, for the most part, considered themselves officially or personally to be Yugoslavs…”

xxiii “…the majority of people did not perceive Yugoslavia as an artificial country or as an unstable region due to ancient hatreds. Particularly not mixed families, who, combined with the old and new undesirable national minorities, composed the vast majority of civilian casualties and refugees in the series of civil wars of the 1990s.”

“…supranational Yugoslavs, Bosnians, or ‘Eskimos’…these postnational peoples certainly believed in the Yugoslav idea promoted by civic nationalism, based on socialist internationalism and respect for each nation and, as such, transcended ethnic nationalism. They were definitely the first among those people who were against the partition of Yugoslavia along ethnic and religious lines.”

“The national identity of ‘Yugoslavs,’ as the seventh nation of Yugoslavia, was based on the very principle of ‘supranationality.’ Even though ‘Yugoslavs’ were composed of ethnic or national Serbs, Croats, Muslims, etc., Yugoslavs were a political nation that transcended ethnic nationalism….these declared and undeclared ‘Yugoslavs,’ or simply people who loved Yugoslavia, represent…a majority of the former Yugoslavia’s population, definitively did not support the break up of Yugoslavia.”

xxiv “…citizens of the former Yugoslavia were ignored as individuals and reduced to ethnic nationals or Serbs, Croats, Muslims, etc.”

“It comes as no surprise then that some people resisted this whole process of national homogenization by declaring themselves, in a sarcastic manner, to be ‘Eskimos’ in the last census of 1991.”

20 “…Tito’s Yugoslavia was conceived from the very beginning as an advanced multinational federation, which further evolved into a distinct multinational and multicultural political community based on the equal rights of its numerous nations and national minorities.”

25 “Yugoslavia was not dismantled due to the ancient ethnic hatreds” between its hostile nations as primordialists argue, nor because it was an artificial “imagined community” that, as such, had to dismember, as constructivists argue. If both, or any of these, claims would be such an imperative, Yugoslavia(s) 26 would not have existed for the past 85 years.

27 “…in addition to the fact that the republics were composed of more than one nation, their various nations and nationalities were increasingly intermingled, particularly in Bosnia that had the highest rate of mixed marriages and children of mixed origin. These “mixed people” were, and still are, the core of the Yugoslav national identity as they usually declared themselves as Yugoslavs. Of course, Yugoslavs are not exlcusively people of mixed national origins.”

30 paraphasing Mihailo Crnobrnja. Yugoslav Drama. Montreal: McGill-Queen’s University Press, 1994: the cause of Yugoslavia’s disintegration was that “although Yugoslavs had a nationality, they never became a nation.”

31 quoting Crnobrnja: ‘The spirit of Yugoslavism had to coexist with, or in spite of, the spirits of the various nations forming it. Yugoslavism did not emerge as a kind of melting-pot blend of the various nationalities composing it….There was insufficient history of common struggle and sacrifice; the identification with Yugoslavia was not strong enough and daily made weaker by the aggressive propaganda of the nationalist champions….The length and type of union that Yugoslavia represented was insufficient to cement firmly and unequivocally the willingness to embrace the present, and especially future, solidarity.’

[This was codified in the country’s constitution.]

[Except nation is an ethnic group with (aspirations of ) a state.]

41 including a notion of citizens or “demos”, the term “nacija” refers primarily to an ethnic or national identity, emphasizing “ethnos.””

[So when the communists were gone, Yugoslavism disappeared too.]

“Yugoslavism as based on this ‘supranational’ principele, even though its driving force was socialism, not capitalism.”

53 “The former socialist Yugoslavia was a federal republic formed as a community of voluntarily united nations and national minorities.”

56 “If the idea of Yugoslav unity and formation of a common state was an artificial social construct, as constructivists argue, how do they account for the long struggle of the South Slavs for a common statehood? What precisely was artificial in the past hundred years of the emergence of the Yugoslav state? And…if it was an artificial country from the beginning, why was this same artificiality, or the same mistake, repeated not only once, but three times within the twentieth century resulting in the creation of three Yugoslavias?”

“Yugoslavia was definitely a noble experiment that resulted in a successful, internationally respected socialist country that developed a unique system of market socialism based on a not-for-profit oriented economy. For this very reason, Yugoslavia was an obstacle to the neoliberal diktat of the free-market policy of the New World Order that emerged from the ruins of the Cold War division of the world.”

61 “external Balkanization led to the internal one, and not vice versa.”

72 quoting Michael Parenti. “The Rational Destruction of Yugoslavia,” 2000. Retrieved from michaelparenti.org/yugoslavia.html: ‘the dismemberment and mutilation of Yugoslavia was part of a concerted policy initiated by the United States and other Western powers in 1989. Yugoslavia was the one country in Eastern Europe that would not voluntarily overthrow what remained of its socialist system and install a free-market economic order.’

75 “the former Yugoslavia was dismantled primarily by external, Western powers, since they gave the political ‘go ahead’ to right-wing nationalist separatist forces in Yugoslavia. This de-facto encouragement was soon followed by de iure international recognition, first by the Vatican and Germany, and followed by the European Community and the United States.”

82 quoting Parenti: ‘Yugoslavia was built on an idea, namely that the Southern Slavs would not remain weak and divided peoples, squabbling among themselves and easy prey to outside imperial interests. Together they could form a substantial territory capable of its own economic development.’

103 Yugoslavia was “probably the most heterogeneous European country”

104 quoting Crnobrnja: Yugoslavia was a ‘country of diversity [that had] 7 neighbors, 6 republics, 5 nations, 4 languages, 3 religions, 2 scripts, and 1 goal: to live in brotherhood and unity.’

“people were simultaneously both Yugoslavs and Croats, Serbs, and so on, whereby the former referred to citizenship and the latter to ethnicity or nationality”

Yugoslavs existed as a statistical category by were not recognized as a nation.

quoting Hayden: Decrease of Yugoslavs in the census, from 5.7% in 1981 to 2.9% in 1991 was most likely due to people’s fear of repercussions (loss of job/property) in the prevalent political climate of chauvinism.

Increase in category “Others” is due to “many people, particularly in the ethnically heterogeneous regions like Bosnia, preferred to declare themselves ‘others’ rather than Serbs, Croats, or Muslims.

quoting Hayden: ‘some respondents to the [1991] census registered a protest against the whole process by listing themselves as Eskimos, Bantus, American Indians, Citroens, light bulbs, and refrigerators—among other fanciful categories.’

113 1974 constitution states that it was the nations (narodi) rather than republics that united to form the Yugoslav state. Republics did not have a right to secede, nations did.

115 “it was…cultural diversity that facilitated a distinct Bosnian and Yugoslav identity, both renowned for openness, kindness and hospitality.”

quoting Xavier Bugarel in Catherine Samary. Yugoslavia Dismembered. Translated from the French by Peter Drucker. Monthly Review Press, 1995: ‘If Bosnia-Herzegovina has one distinctive and enduring feature, it consists in belonging to no one people, in being a permanent site of intermingling and assimilation, a crossroads of civilizations and a periphery of empires.’

117 “[the] disappearance of Yugoslavs is due to the disintegration of the former Yugoslavia and the consequent ‘ethnic purification’ of Bosnia, and Yugoslavia at large.

119 Yugoslavs and Yugoslav national identity disappeared “because the very existence of Yugoslavs and of ‘mixed’ families was denied.” People had to choose an ethnic identity in order for republics to be homogenized.

majority of interviewed Bosnian refugees in Montreal “declared their national identity as Yugoslavs before the war. With the dismemberment of Yugoslavia, these people, particularly mixed families, lost not only their state but also their native homeland.” aka apatrides or heimatlosen

137 quoting Euripides, 431 BC: ‘there is no greater sorrow on earth than the loss of one’s native land.’

145 “regardless of the respondents’ nationality, all of them are ‘Yugonostalgic’, that is, they have nostalgia for their lost homeland, socialist Tito’s Yugoslavia”

152 “the memory and soul of multicultural and multinational Yugoslavia is still alive [among Yugoslav refugees in] Montreal, which enhances my claim that socialist Yugoslavia was quite a viable and noble idea far from being an artificial project.”

155 “This loss of ‘normal’ life is at the heart of ‘Yugonostalgia’, or the sorrow caused by the lost good life and the lost homeland. This is true not only for my respondents but also for other refugees (or immigrants) living now outside the territories of the former Yugoslavia. This is also true for those people who remained there, since the nostalgia for Yugoslavia (SFRY) means, above all, the nostalgic memory for the lost good or ‘normal’ life and, therefore, it knows no boundaries.”

164 There exist among immigrants/refugees in Canada “already in place ethnic or cultural communities divided principally along religious lines and concentrated around different churches.”

173 “all seven Yugoslav nations (Croats, Macedonians, Montenegrins, Muslims, Serbs, Slovenians, and Yugoslavs) never described themselves as ‘ethnic groups.’ [T]hey perceived themselves as ‘narod’ (people/nation) rather than ‘nacija’, which means exclusively ‘nation’ in a national(ist) sense that was in essence contrary to the very idea of socialist internationalism, and Yugoslav supranationalism. The former Yugoslavia was not only a mono-ethnic state of the South Slavic nationas with a variety of ethnic and national minorities, but also the Yugoslav idea involved both civic and ethnic nationalism, including thus political and cultural projects.”

178 “The former Yugoslavia was a ‘promise land’ for the Communist bloc, especially for nearby Eastern Europeans….[W]hile the disintegration of Yugoslavia is a warning to the world…the loss of this unique country is the loss not only for its citizens but also for all humanity.”

180 Author saw a graffitti “Kill All Yugonostalgics” (“Ubiti sve Yugonostalgičare”), in 1997 at a bus station in Croatia on the Brotherhood and Unity Highway.

Nope, Yugoslavia is dead to me