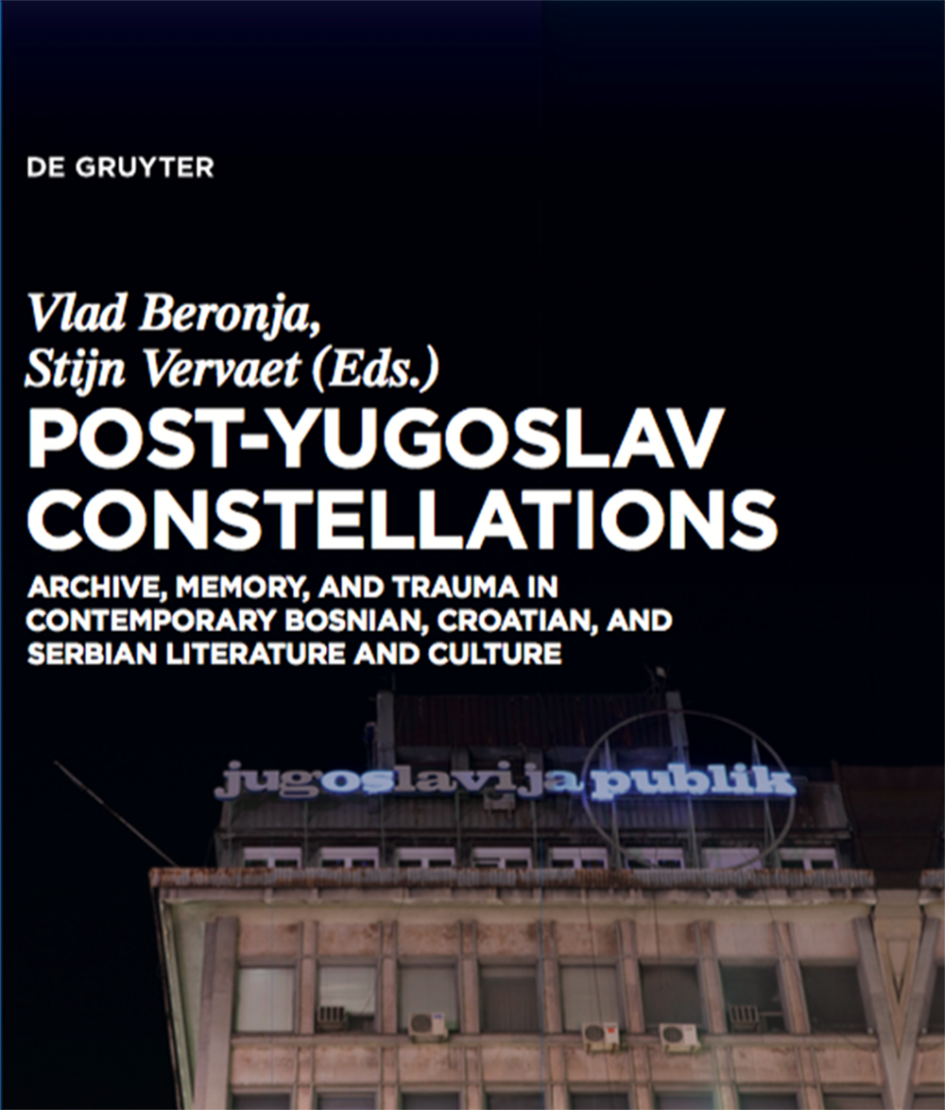 Vlad Beronja and Stijn Vervaet. “Introduction: After Yugoslavia-memory on the ruins of history.”

[Three different versions of history within a generation.]

cultural memory = “performative engagement with the past”

Vladimir Biti. “Remembering Nowhere: The Homeland-on-the-Move in the Exile Writing of Saša Stanišić and Ismet Prcic.”

62-63 For exiles, “the disquieting nowhere is not only the birthplace but also the destination of their operations of remembering. There is no-thing waiting at the end of the journey, no terra firma that would soothe the restlessness. In both spatial and temporal terms homeland turns out to be something missing, displaced into elsewhere. (…) [Homeland is not] something to be possessed but…something that one is always dispossessed of anew.”

Sanja Potkonjak and Tomislav Pletenac. “The Art and Craft of Memory: Re-Memorialization Practices in Post-Socialist Croatia.”

65 Quoting Holm Sundhaussen: At the end of the 1980s, “Yugoslav ‘memory’ was broken into a series of national ‘memories.’ Before these were created, heroes of Yugoslavia had to fall.

Halbwachs: the group that remembers determines the content of collective memory (that which is remembered)

69 Croatia: newly dominant community formed around a national project by selective remembering (and forgetting), political manipulation of collective memory, repression of the cultural memory of anti-fascism, and promotion of cultural memory of WWII’s NDH / War for Croatian Independence.

71 Mariane Hirsch: concept of post-memory = not a recollection but “memory mediated by imaginative investment, projection, and creation” i.e. activating past events whose effects continue in the present

Ann Rigney: art can create “oppositional memory,” a “counter-memorial, critical force” which undermines the dominant narratives of the past

144 Dubravka Oraić Tolić, 2005: “It was not just the disappearance of an ideology, or its institutions…but also of all forms of life. In the end, it was a loss of identity of all who lived in that world, regardless whether that world was someone’s home or prison.”

Tatjana Jukić. “Post-Socialism Remembers the Revolution: The Comedy of It.”

149 “The post-Yugoslav imaginary depends on post-socialism for its constitution… (…) Yugoslavia…cannot be properly understood outside its socialist agenda. [T[he post-Yugoslav imaginary seems most productive where it addresses what was specific to Yugoslav socialism,” especially the revolution [home-grown, out of anti-fascist resistance, rather than imposed from the outside] as the founding event. [YU experience is thus closer to USSR and Cuba than other socialist countries.]

Nikola Dedić. “Yugoslavia in Post-Yugoslav Artistic Practices: Or, Art As…”

[It’s possible everyone sees in Yugoslavia what they want, their own thing; multiple interpretations, multiple meanings, multiple functions.]

187 Post-Yugoslav art is on the left, just as radical Yugoslav art was (Yugoslav constructivism, Partisan art)

188 In post-Yugoslav art, Yugoslavia is neither nostalgia or restoration but rather “a form of negating the current social status quo, thus a fresh attempt to rethink social alternatives through a critical view of the past.”

263 “Cultural production…was intrinsic to the making and breaking of the state that was the former Yugoslavia. Literature, poetry, and theater did not simply reflect a mobile political climate; they helped to direct the winds of change that would sweep over it.” Both literature and poetry continue to be mobilized for political purposes in ex-Yugoslavia.

280 Online “the forlorn Yugoslav socialist past is continually getting a new life or, more precisely, a digital afterlife.”

281 Much of this online content is created retrospectively, which “reveals a certain retroactive refurbishing of dead people’s lives.”

“this desire to reassemble the Yugoslav past…emerges as an attempt by users to endow their individual biographies with a sense of normalcy and to recreate the past and present as a particular epoch.”

282 Boris Buden: mediatization of the every day makes the past a cultural rather than temporal category, it’s everywhere like culture

Online, the past “lives on and contributes to our understanding of the present primarily through re-presencing the events, topics, issues, personalities, ideas. (…) the past re-presenced through grassroots memorials and commemorative practices also…obscures the historicity of that past.” Historical facts suffer, replaced by a nostalgic, affective version of the past.

286 Social media function as “cyberplaces of memory,” media for micro-archiving.

288 “through media externalizations and circulation of curated content, the past in such re-narrations becomes a present worthy of consideration.”

Digital memorials are “specimens of the digital afterlife of the country”

Nostalgia and agency are intertwined

Social media activities related to Yugoslavia are an