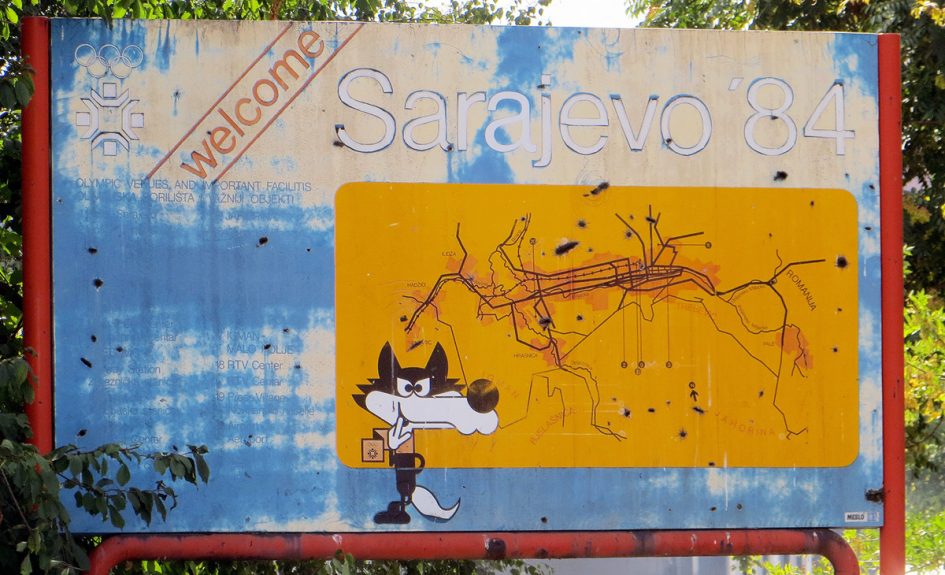 Thirty-five years ago today the Sarajevo 1984 Winter Olympics started. The event was Yugoslavia’s proudest moment in the final years of its existence.

1984 Sarajevo Olympics in a Nutshell

The 14th Winter Olympic Games took place in Sarajevo, Yugoslavia from February 8 to 19, 1984. This was the first Winter Olympics, and second overall Olympics (after 1980 Moscow Summer Olympics), event in a communist country. It was also the biggest sporting event in Yugoslavia’s history; 1,272 athletes from 49 countries competed in 6 sports.

As is the tradition, the Olympic torch started its journey at Olympia, then was flown to Dubrovnik. There it was split and traveled in two routes:

The final of the 1,600 torchbearers was the figure skater Sanda Dubravčić.

The mascot was Vučko, a small wolf designed by the Slovenian designer and illustrator Jože Trobec (runners up included a squirrel, lamb, mountain goat, porcupine, and snow ball). Zdravko Čolić lent his voice to Vučko in the official song.

The event cost USD 142.6M, some of which was raised from citizens of Yugoslavia.

The event was nicknamed “the Games of Peace” because athletes from the U.S. and the Soviet Union participated after recent boycotts.

1984 Sarajevo Olympics in a Bombshell

Many sites were used for military purposes or bombed during the 1991-1995 war.

“War tore apart the city that hosted the 1984 Winter Olympics — here’s what the abandoned venues look like today,” Business Insider, 2/7/2018

Those were the days. pic.twitter.com/Uag0xY5sRj