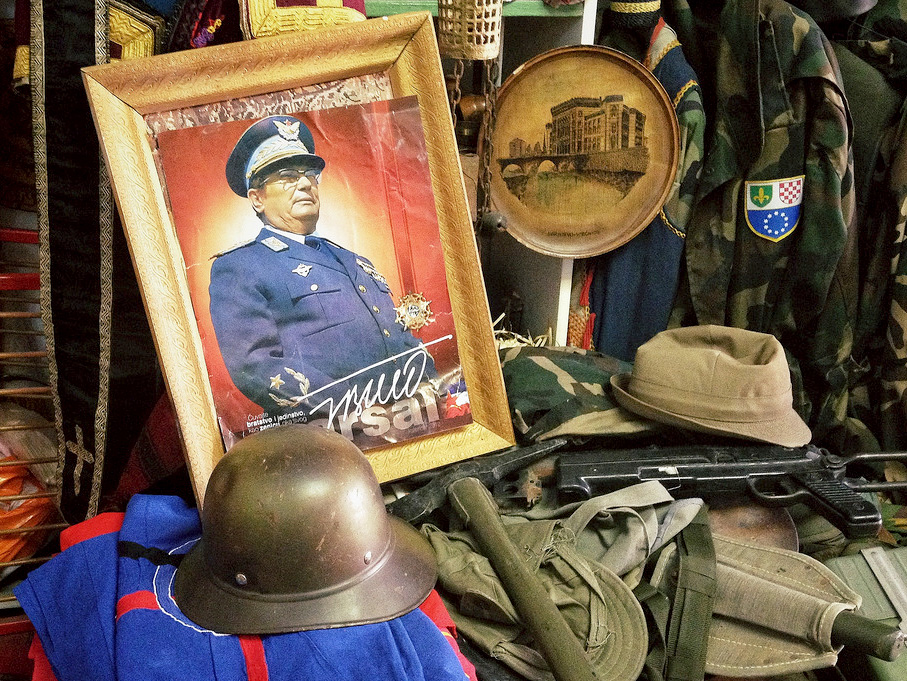 Note: Translation of excerpts from the article by yours truly with the help of Google Translate

Kajtez “Kajto” Sabljaković’s čevabdžinica Kvarta is located near the center of Velika Kladuša, in western Bosnia. Known all over Bosnia and beyond, he and Sulejman “Sula” Muhamedagić are the greatest living keepers of the memory of former Yugoslavia, the most dedicated fans of the persona and works of the country’s greatest son, and chronic nostalgics for the times that will never return.

Kajto is president of the Josip Broz Tito Association, which has more than 1,000 members. Sula remains the last Kladuša Partisan. When he took office in 1982, the local SUBNOR counted exactly 1,732 anti-fascist Partisans as members.

In Velika Kladuša, the memory of Josip Broz Tito is kept stronger than anywhere else in the countries of the former state. “The Old One” watches over the restaurant space from every wall as well as various memorabilia.

In Karlovac, Croatia last year they concluded that Tito was too much of a criminal for a city square to continue being named after him, so they renamed it, renouncing the mention of the former president of the former state. Here, an hour away, we meet people who almost do not want to admit that Tito has ever died.

Sula: “When I put flowers on Tito’s grave, in 2014, Belgrade journalists asked me why I came every year, and I told them, ‘If I could get Tito out of the grave and lie there instead of him, I would do it immediately and without thinking for the benefit of all the people of Yugoslavia!'”

Kajto: “I’m a big nostalgic for those times. I think of waking up in those times, in his system, though I had 90 percent less than now. What am I missing so much? Well, there was much less stuff back then but nothing was wrong either. I miss the most my comrades from Novi Sad, Niš, Skopje, Zagreb, Rijeka, and Ljubljana. People spent time together, traveled around, there was friendship and fellowship. Now everyone is behind their gate and that’s it.”

The Josip Broz Tito Association was formed 14 years ago, on Kajto’s initiative, who became its first, and so far the only, president.

Kajto: “Five or six of us who had previously attended ‘labor actions’ were traveling to Kozara, Smederevo and Belgrade, and came up with the idea of creating an association. We gathered some people who chose some officials, and in the first year we already had 650 members. The was a membership fee of 12 Bosnian marks or dollars or euros, depending on where the member lived, because quite a few members were from abroad. We use the money to print t-shirts for children. For Victory Day, May 9, we organized a great event on anti-fascism and Marshal Tito, where children from kindergarten to youth participated. Around noon, we sang, “Druže Tito, mi ti se kunemo” so loud that the hodja had to pause the prayer.”

The number of members continued to grow, and soon numbered 1,000. Kajto and his comrades, along with Sulo and his fighters, took care of anti-fascism monuments and commemorated important anti-fascist dates. They have organized trips to events connected to important dates and places, e.g. Belgrade, Kumrovec, Sutjeska, Kozara, Neretva, Mrkonjić, Brezovica, Šamarica, Banki Grabovac, Partizanska Drežnica, Petrova gora, Jasenovac, Srb, Drvar. On one trip in 2007, they filled up 12 buses and failed to accommodate all those interested.

As years went by, the number of passengers decreased, and they decided to no longer collect membership fees but rather pay for travels and wreaths from their own pockets because it was simpler.

However, smaller numbers of passengers did not diminish the verve with which they were following the well-trodden paths of the revolution. Regularly two full buses leave from Velika Kladuša to events, and sometimes they even outnumber locals.

Kajto: “We celebrate those times, we show respect for Tito, year after year, just like many others. There is a group of Macedonians wearing JNA or militia uniforms. And then we talk, and everyone has their own painful story. Slovenes are the most devoted and far ahead of us all. And at Sutjeska, I was surprised to hear how many Dalmatians died there.”

Kajto is nostalgic for Yugoslavia because he is lacking the kind of freedom he had under Tito whom he met in 1971 in Karlovac.

Sula: “I used to identify as a Serb and later I was a Yugoslav. If someone asks me now, I would not know. Many are calling themselves Bosniaks, but I do not feel I could say I am a Bosniak. Kids today no longer study anything about the national liberation war, and this period of history seems to have disappeared from textbooks.”

Kajto: “I don’t think anyone in the Federation marks national liberation war dates as we do in Kladuša.”

The Association has support from the city, which pays for wreaths and monument restoration, and from the mayor Fikret Abdić.

Anti-fascism somehow helps heal the wounds of 1990s war faster. Josip Broz remained a universal value for them during and after those years. After the war, when Abdić was imprisoned, several streets were renamed by Izetbegovic’s people, but with his return, the anti-fascists returned as well. Sula says it’s because that first war there was even bloodier than the recent one.

We say goodbye to Kajto and Sula at the City Park, which was recently renamed SKOJ Secretary’s Park, because he wants to show us a monument to Partisans built in 1951 and renovated in 1999. We walk along the Street of the Victims of Fascism. Opposite the Orthodox church is a park with memorials to the most important anti-fascists and folk heroes in this region, Ibrahim Mržljak, Milan Pilipovic, Omer Duranović, Zuhdije Žalić and Tone Hrovata. All of them, of course, have their streets a bit further, just like anti-fascists Ivan Goran Kovačić, Vladimir Nazor, Ivo Marinković and important politicians from the past, Cazinjanin Hamdija Pozderac and close associate of Tito, Džemal Bijedić.

A little further is Josip Broz Tito Street, which surrounds a park dominated by a Partisan monument, which is also beneath the windows of Mayor Abdić.