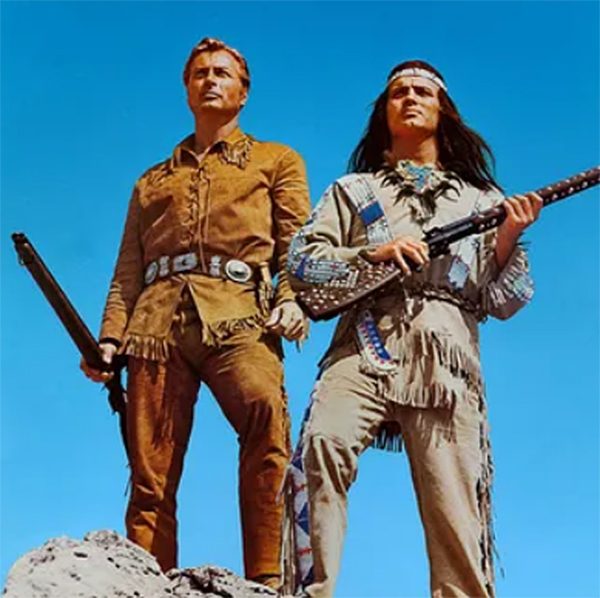 Few childhood heroes feature as prominently in Central/Eastern Europeans’ imaginations as Winnetou, the Chief of the Apaches AKA the “Red Gentleman”; few evoke as strong a sense of nostalgia for me decades since I watched his adventures on Czechoslovak TV. I don’t think about him much…until I do.

As befits a stealthy warrior, Winnetou has popped up on my screens out of nowhere and set me on a memorypath yet again.

wiIn the Footsteps of Winnetou

The protagonist of 1890s Western novels by the German writer Karl May rode through Czechoslovakia’s and other Eastern Bloc countries’ pop cultures in uber-popular 1960s (West) German movies. The first installment remains the second most attended film in Czechoslovakia of all time. Winnetou was so popular that Czechoslovak Communist Party’s Central Committee issued a directive against the commercialization of his image by our companies.

Every generation of pale-faced Czech and Slovak boys, myself included, grew up with Winnetou.

I read all the books, more than once.

I watched the movies (we only had four or five of the 11 made), in which Winnetou was played by the late French actor Pierre Brice, and his blood brother, Old Shatterhand, a land surveyor turned punchy adventurer (and Karl May’s alter ego) played by the American Lex Barke.

And, like my friends, I quoted them all too much (“…if I’m not mistaken, hee-hee-hee.” “Do you feel strong enough to die at the torture pole?” “He’s not dead, he’s just sleeping.”).

I pledged loyalty to my best friend on par with the duo’s brotherhood, though neither of us slit our forearms and join the wounds to seal the deal like they did.

I didn’t know May’s books and the Winnetou movies were banned in neighboring East Germany until the early 80s because they glorified expansionist, murderous colonization of the American West. I didn’t know the “Indians,” played by Yugoslav extras with darkened skin, were idealized as noble savages and infused with German-Christian traits. I definitely didn’t know the books were popular in Nazi Germany and Hitler distributed copies to his officers (Klaus Mann called Karl May “the Führer’s cowboy mentor”).

And I had no clue the genre of these West German co-productions with Yugoslavia was sometimes called Kraut western; that it was a precursor to Spaghetti Western; that it spawned the response in the form of Indianerfilme (Indian films, more below) in East Germany and Ostern (ost = East in German) elsewhere in the Bloc; or that one term for Yugoslav Partisan films, which we actually never saw in Czechoslovakia, was Gibanica western.

I mean, I was just a boy. But as such, I did know one thing with absolute certainty: I yearned to adventure in the land where the films were shot, Yugoslavia.

Winnetou and Old Shatterhand in Yugoslavia

I had no clue what these places were called at the time, I just knew I wanted to go there. With Winnetou, the distant seaside paradise that was Yugoslavia also became a mountain paradise that was the Wild West of the imagination. I rode across the plains of Texas Lika, scaled the craggy hills of New Mexico Dalmatia, canoed down the rivers of impossible blue-green in search of adventure, truth, and the common good.

I’ve been to a handful of the filming locations, and the rest are on my to-go list. And no matter what my eyes will see, the mind’s eye will overlay the western over the landscape and wonder just how popular the films must have been in the lands where they were filmed. 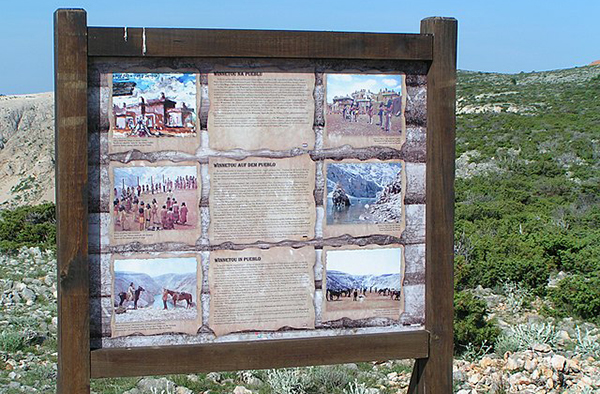 An information tableau about the filming of Winnetou at Zrmaja Canyon. Image CC-BY-SA F.Krikava, Wikimedia

Pierre Brice reprised his most famous role in a 7-part, not-so-great TV series Winnetou the Mescalero (AKA My Friend Winnetou). Filmed in the U.S., with an older Brice and a different Old Shatterhand actor (Lex Barker had died in 1973), it just wasn’t the same.

Neither are the original films. I rewatched some of them in the past couple of days. They remained the same while I’ve changed. The pacing is off, the concepts and imagery are often cringeworthy, tropes abound, there’s awkward dialogue, goofs (a bus! a baseball cap!), and logical inconsistencies… The price you pay for aging while the objects remain frozen in time, I suppose, and a reminder of what nostalgia is all about: memory, rather than reality.

The 1998 Return of Winnetou did not even register with me, and neither did the 2001 parody Manitou’s Shoe.

Many of the 60s films are up on YouTube in various versions: in the original German, subtitled in Serbo-Croatian, Romanian, and probably other languages, as well as dubbed in English, Czech, Hungarian, and who knows what else.

In the movies, you may recognize Karin Dor (You Only Live Twice), Götz George (Tatort), Terrence Hill (Lucky Luke), Klaus Kinski (Aquirre the Wrath of God)…

…and if you’re from my part of the world, you may also know Gojko Mitić.

Pierre Brice as Winnetou on the right, topless Gojko Mitić as White Raven, brother of Winnetou’s love interest Ribanna, in Winnetou 2: Last of the Renegades (1964)

In response to Winnetou‘s popularity and questionable message, East Germany made its own “Indian films.” The Sons of the Great Mother Bear was a co-production with Czechoslovakia (the director, the villain, and many actors were my compatriots). It was shot in Yugoslavia, using many of the same locations as Winnetou, and in several other countries. It ideologically correctly portrayed the Natives as victims and settlers as evil, murderous perpetrators.

The Sons spawned several sequels, eleven to be precise, reaching cult status. I and my friends watched them and liked them but there always remained only one “Indian” hero.

The main character in The Sons was played by a Winnetou alum. Born in Leskovac, Serbia, Yugoslavia, Gojko Mitić was the son of a Yugoslav WWII Partisan officer and a rare émigré to East Germany. In 1992, Mitić replaced Brice as Winnetou in the annual open-air fan-fest show “Karl-May-Festspiele,” a role he played until 2006.

In 2016, the German company RTL released a three-part remake of Winnetou, again filmed in Croatia. Winnetou is played by an Albanian actor, Old Shatterhand by a German one. Pierre Brice was slated to play Winnetou’s father, Inchu-chuna, but he died before the production and the role was given to Gojko Mitić. Until this week I didn’t even know this adaptation existed. I’ll watch it if I ever get a chance.

And if I’m ever in the Czech Republic and theatrical production of Winnetou is on, I’ll definitely go.

Winnetou has lived many lives and that he keeps popping up in my life the way any childhood hero might from time to time.

This week’s appearance comes courtesy of Twitter, where I’m mostly a lurker. A Croatian hotelier is producing a series of shorts featuring as Winnetou the Croat-German (German-Croat?) actor Ivica Zdravković, the son of Yugoslav Gasterbeiters who also portrays the Red Gentleman at a Wild West theme park in Bavaria.

A couple of facepalms later, I dug into the story and it all started to make sense, albeit in a perverse kind of way. Croatia is capitalizing on the 60-year-old movies, part of its branding as a filming destination. The aim of these new short is to promote the Winnetou filming locations, the Winnetou Museum in Starigrad-Paklenica, and Dalmatia overall to the German market. In other words, Winnetou has been transformed from a peaceful warrior dignity into a marketing tool.

The campaign has a slogan: “Winnetou was born in Germany and his homeland is Croatia.” Of course that’s wrong: everyone knows Winnetou’s homeland is the Yugoslavia in our hearts.

“I have finished speaking.”

A shorter version of “Wild Westoslavia: The Red Gentleman Returns Yet Again” first appeared in the Remembering Yugoslavia weekly digest. Sign up to get the digest in your inbox: