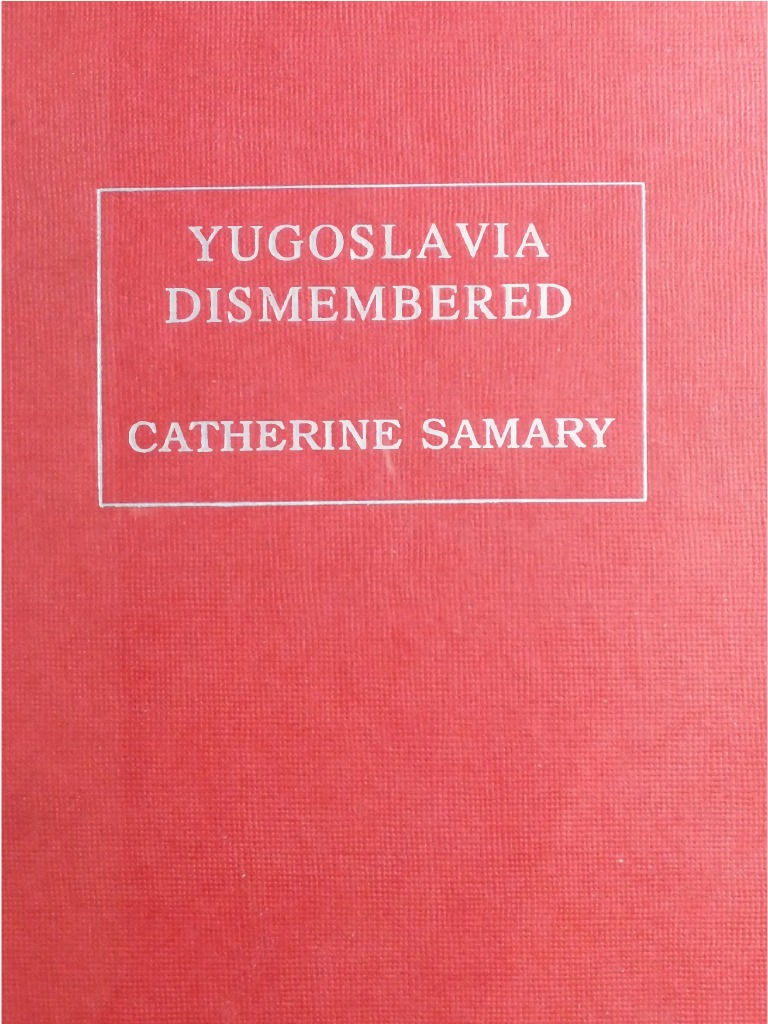 Good overview of crisis and its seeds from the French Left perspective.

28 “…a painful logic for all those who identified with Yugoslavia. Some of them “felt” Yugoslav because they came from mixed families; others because they valued a diverse cultural “space” based on citizenship without denying anyone his or her ethnic origin, or because they were reacting against exclusionary nationalisms…. Individuals were free to claim whatever nationality they wanted, within the limits of official nomenclature…. But it is very significant that more than 1.2 million “Yugoslavs” declined to state an ethnic identification in the 1981 census.”

footnote to page: “For many years, people could not call themselves “Yugoslav” in the census. This word referred to the citizenship (affiliation with the Yugoslav state) that everyone shared, but not to a “nationality” (in the ethnic-cultural sense) that any one person could choose. Rejection of the unitary character of the first Yugoslavia, which attempted to impose a Yugoslav nationality on everyone, contributed to a suspicion of any cultural or “ethnic” “Yugoslavism” which was seen as a threat to particular identities. But people could tell the census-taker that they were “undetermined,” which is what more than 1.2 million “Yugoslavs” did in 1981: 7.9% in Bosnia, 8.2% in Croatia, 0.7% in Macedonia, 5.3% in Montenegro, 4.7% in Serbia—but 8.2% in Vojvodina and 0% in Kosovo—and 1.3% in Slovenia.”

29 “…we reject the thesis that living together was impossible. This pseudo-interpretation of the crisis only conceals the existence of other options. It legitimates chauvinist, exclusionary nationalist policies in Serbian and Croatia [and] justifies the dismemberment of Bosnia-Herzegovina: if the Yugoslav blend was artificial, the same must be true of the Bosnian blend.”

31 “It was “worth it” to be be Yugoslav…as long as people “got something from it” (rights to their own identity and socioeconomic security). [I]n times of crisis, separation and identification with a smaller community can seem a route to more security and higher status.”

32 “The periods of Yugoslavia’s…greatest cohesion corresponded to the times when the populations concerned experienced real gains in living standards and rights. It was by contrast threats to these gains during the 1980s—not interethnic hatred—that gave rise to Yugoslavia’s fragmentation.”

43 Mixed marriages among Bosnian Muslims (about 40% in BiH cities) encouraged more and more Bosnians to call themselves Yugoslavs in census.

“There is no Yugoslav “project.” There have been…several different Yugoslavas, and other forms of union have been possible…. a setback does not necessarily prove that the attempt was “artificial.””

48 Resistance against “German and Italian political and economic domination” without having to build separate nations was “one of the key raisons d’etre of the second Yugoslav union.”

51 End of the 1980s seen in Belgrade: Yugoslavia is “an irreversible failure;” in Ljubljana “an unbearable economic burden;” in Zagreb “anti-Croat” by essence.

Titoism: “suppression of any [political] independent movement combined with [economic] concessions from above.”

“Repression helped to fuel extremism…instead of containing it.” Croats were ‘paying’ for the Ustashe past, Serbs for domination in the First Yugoslavia.

57 “Some say today that the second Yugoslavia like the first was “artificial,” imposed by a dictatorship which this time around was dominated by the Communist Party. Were the Communists able, after fighting the first Yugoslavia as a “prison of the peoples,” to impose this new Yugoslavia against its people’s will?”

58 The second Yugoslavia was built on a rejection of the first one. “It was the product both of genuine popular uprisings that legitimated Communist leadership and brought about victory, and of domination by the CP, which was structure on the basis of the different republics but still a single party.”

59 “The Communist leaders formed a multiethnic, pragmatic leadership on nationalist questions. Concerned above all with consolidating power, they knew that any Yugoslav state dominated by one particular nationality would be doomed to fall apart, just as any Yugoslav state that denied all national differences would be doomed to fall apart. Titoism meant bureaucratic stifling of nationalisms that were seen as dangerous, but not of national identities in general.

The single Yugoslav citizenship had been distinguished from the different nationalities, which were the basis for collective, cultural, religious, and political rights within the federative system.”

narod (constituent peoples or nations, of which there were 6: Serbs, Croats, Slovenes, Macedonians, Montenegrins, and from 1961 Muslims) vs narodnost (nationality, a more acceptable terms for national minority, but not constituent peoples of Yugoslavia: Hungarians, Albanians in Kosovo)

60 Only nations had the right to self-determination and to secede.1974 Constitution created a more confederative system: collective presidency, veto power for each republic and provinces

62 “Confederalization and economic decentralization enabled the single-party regime to put off a looming crisis. They created “shock absorbers”…”

63 1970s was the last decade of growth, though that came with the price of rising debt, made public in early 1980s

“After years of growth, the three pillars of the system—living standards, social rights, and national rights—collapsed during the 1980s.” Attempts “at recentralization reinforced centrifugal tendencies instead of containing them.”

“One of the keys of Titoism’s longevity had been, not “anti-Serb” policies, but the rejection of Serb domination.”3 main objectives of the Yugoslav project:

70 Forces working against disintegration:republics threatened by the prospect of Yugoslavia’s breakup (especially BiH and Macedonia)

77 JNA “was defending its privileges and the federation….Its tradition was “Titoist” not “Greater Serbian”

87 Quoting Xavier Bougarel: “If Bosnia-Herzegovina has one distinctive and enduring feature, it consists in belonging to no one people, in being a permanent site of intermingling and assimilation, a crossroads of civilization and a periphery of empires.”

In 1991, less than 10% of BiH population lived in municipalities with 80+ percent of single-group population.

89 Citizen parties had better electoral results in heterogeneous and Muslim-majority municipalities of BiH. Poorest and most religious rural areas were where nationalist parties prevailed.

“our general hypothesis: that there is a positive correlation between commitment to a multiethnic reality and an economic development resulting in urbanization, industrialization, and intermingling…”

90 “The countryside has often been cut off from these developments…. The countryside is more combustible in the time of crisis…. More vivid memories of the past are undoubtedly more important as well in these rural areas…”

“In the cities, by contrast, it is the most recent past that has the biggest impact on people’s consciousness. In Bosnia-Herzegovina, the most recent past tended toward the creation on a multiethnic Bosnian national community, content to live together. Nationalist logics were rooted in the poorest and most religious social categories and regions.”