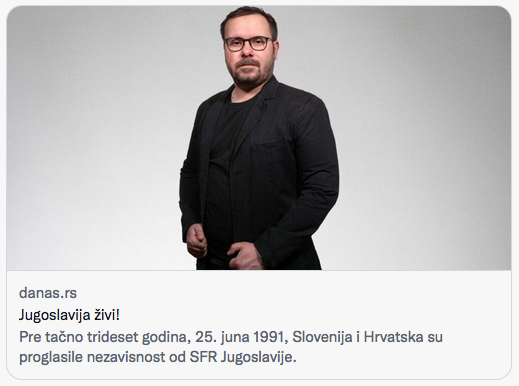 This is a translation of an essay by Aleksej Kišjuhas which appeared in his column at Danas.rs on July 4, 2021 under the Serbian-language title “Jugoslavija živi!” (Yugoslavia Lives!). I’ve translated the piece with the kind permission of the author, a sociologist and associate professor at the Faculty of Philosophy in Novi Sad. Any formatting changes from the original text are mine.

On June 25, 1991, Slovenia and Croatia declared independence from the Socialist Federal Republic of Yugoslavia. The war started the next day.

Thirty years later, to use the words of philosopher Momčilo Bajagić, “Are we happier? Are we smarter?”

Yugoslavia lives as a metaphysical symbol, a cultural relic, a value label, political subversion, and nostalgia for or collective memory of a better past.

But Yugoslavia also lives as a social reality, in the sense of statistical data or hard numbers as well as socio-historical facts, whose persistence we still feel and reckon with today.

That we are the sole creators of our own destiny without the influence of structural, historical, and sociological processes is a neoliberal and ahistorical deception. Rather, we should thank socialist Yugoslavia for living in cities, shopping in supermarkets, or having university degrees and paid vacations. And in the present Tito’s summer of 2021, we ride on highways built in Yugoslavia toward hotels and beaches on the Adriatic Sea that were built, again, in Yugoslavia. That is precisely why Yugoslavia is still alive.

First and foremost, literacy. In 1921, as much as 51.5 percent of the population of the Kingdom of Serbs, Croats, and Slovenes was illiterate, while in 1981 the share of illiterates in socialist Yugoslavia was only 9.5 percent.

It was Yugoslavia that organized mass literacy courses lasting 30 work days, in which elderly men and women huddled on wooden benches in rural schools to read and write their first words.

Libraries opened in cities and villages and books and newspapers became available to everyone, and they all featured sections for children that still exist today.

Second, education and child-rearing. It was the socialist Yugoslavia that introduced mandatory eight-year education, which is now completely normal to us.

A record number of primary schools, which still exist today, were built in Yugoslavia.

A lively practice of school excursions–to cities in other republics or places connected to WWII-era People’s Liberation Struggle–was introduced. After a century of having to work in the fields and fulfill other pressing obligations, children now had to dedicate themselves only to education.

In Yugoslavia in 1945, there were three universities and two colleges. Thirty years later, there were 158. In 1980, half a million students were attending universities in Yugoslavia, at a ratio of one student per 50 residents (in the Kingdom of Yugoslavia the ratio was 1 to 1,000). In terms of student enrollment, socialist Yugoslavia held fourth place in Europe, trailing only Sweden, the Netherlands, and the Soviet Union.

This sociologist and columnist still works at a university founded in socialist Yugoslavia.

Third, infrastructure and industrialization. As early as 1947, the state was investing heavily in electrification, metallurgy, mining and transportation, and later also in housing, light industry, and the service sector. Between 1953 and 1960, industrial production grew by 13.83 percent annually, a world record, beating out Japan.

Factories, railways, and highways were constructed, tunnels were dug, and tens of thousands of apartments, hospitals, health centers, schools, kindergartens, and colleges were built.

Today we may take electricity for granted but electrification is the living legacy of Yugoslavia as well. In the 1960s, massive numbers of Yugoslav villages got electricity and the first electrical devices.

In other words, our society only became an industrial society during socialist Yugoslavia, thereby stepping into modernity for good.

In 1981, agricultural workers constituted only 29 percent of employment, while industrial workers made up 35 percent and 36 percent worked in the service sector.

It was also a society of bold and intense urbanization (between 1945 and 1953, one and a half million people emigrated from villages), that is, of high spatial mobility; in 1981, as many as 41 percent of Yugoslavs did not live in their place of birth.

Yugoslavia’s industrialization and urbanization irrevocably transformed the backward and lagging Balkan regions, so that nowadays we live in modernist apartment towers and are organized in local associations.

Mass housing construction and urbanization also meant a rise in living standards and the need for new organization of apartment living. Factory-produced Yugoslav furniture–the iconic three-seater, two-seater, and armchair; massive carpets and curtains; and a wall-spanning entertainment center with a TV, book sets, and crystal glasses–undoubtedly still survives today, albeit in our parents’ apartments.

We forget that socialist Yugoslavia eradicated typhus, malaria, tuberculosis, diphtheria, dysentery, and high child mortality thanks to vaccination, public health, and popular education. Before socialist Yugoslavia, infectious diseases claimed thousands of lives due to the lack of physicians, to subpar living conditions, including no running water and sewage, bedding, laundry and dishes, to poor hygiene habits, and to traditional beliefs and village customs.

Health centers, those basic units of health service organization in socialist Yugoslavia, are also very much alive today. And based on the Social Security Act of 1946, Southern Slavs finally won the right to receive benefits during illness and pregnancy, as well as to a pension.

Fifth, tourism and paid vacation, which was first introduced in 1946 for a period of 14 to 30 days.

Over time, vacationing at the sea became an indispensable part of the personal calendar for all Yugoslavs, also something we take for granted today.

The development of tourism at the Adriatic coast had begun in Austria-Hungary at the end of the 19th century, but it was reserved for the elites. The democratization of tourism and the culture of seaside vacationing became embedded in society’s core only in the Yugoslav times.

Yugoslavia thus lives to this day, even among the hordes of Serbian citizens headed to Greece despite the epidemiological challenges.

We forget that even the weekend is a Yugoslav phenomenon. Yes, a two-day weekly break was also introduced in socialist Yugoslavia, in 1965, when the work week was shortened to 42 hours. It was only in Yugoslavia that the weekend culture of leisure and trips to nature emerged and that the mass construction of weekend cottages occurred.

Sixth, consumer and popular culture, which Eastern European societies only adopted after the fall of the Berlin Wall.

The first supermarket in the region opened in 1956 in socialist Yugoslavia. Shopping for mixers, pressure cookers, dishwashers, synthetic clothing (nylon socks and tracksuits), soup pouches and powdered juices, cars, and televisions exploded in our Coca-Cola socialism. The South Slavs were never socioculturally closer to the West than in this period.

In Yugoslavia, people listened to and played quality jazz and rock’n’roll, high-quality films were made, and Yugoslav hits by the likes of Đorđe Balašević, Bijelo Dugme, Haustor, Parni Valjak, and Električni Orgazam still spin today on the playlists of post-Yugoslav entertainers in urban cafés (which also opened for the first time in Yugoslavia).

What’s real is the fact that even today we receive medical treatment and vaccinations, study, work, live, travel, vacation, and spend weekends in institutions created in the Socialist Federal Republic of Yugoslavia. It’s just that we forgot about it in the (post)conflict period.

The past prior to these institutions seems like a foreign country. That is why Yugoslavia was and remains our country. It lives in the social fabric even today, in our common languages, rituals, rights, and everyday practices. Thirty years later, Yugoslavia is still breathing.

Socialist Yugoslavia produced a real, irreversible, and profound transformation of social relations that touched every area of human life: social and economic structures, geography and infrastructure, family relations, childhood, literacy, education and health, consumption, culture and customs. In short, our society ceased to be peasant and traditional and became urban and (post)industrial. That is why socialist Yugoslavia was the most successful modernization project in this poor part of the world, which we now call “the region.”

It was both the space and the time of the greatest progress and emancipation in the South Slavic peoples’ living memory. Simply put, our nations and nationalities finally stepped into modernity by way of Yugoslavia. And to the extent that we are still modern today, that is, literate, educated, healthy, insured, urban, enlightened, and pop-cultural, Yugoslavia lives. And it will live forever.