The Cultural Life of Capitalism in Yugoslavia 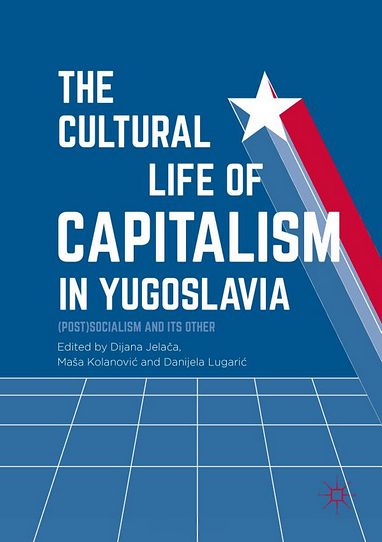 Jelača, Dijana, Maša Kolanović, and Danijela Lugarić, eds. The Cultural Life of Capitalism in Yugoslavia: (Post)Socialism and Its Other. Basingstoke, UK: Palgrave MacMillan, 2017.

vii “The book is dedicated to the “lost Yugoslav generation,” which we see ourselves part of. All three of us were born in 1979, and consequently only experienced Yugoslavia as children. The country’s disintegration simultaneously marked the end of our childhoods. As a result, we belong to a generation that is neither here nor there, neither last nor first, but rather “lost.” But lost to whom, or to what, remains an open question….”being lost” [is] a site of opportunity rather than deficit…”

Capitalism was present in socialist Yugoslavia’s “cultural field” before 1991 – result of Yugoslavia being an open country with a market economy introduced early on (workers’ self-management in early 1950’s, market socialism in mid-1960’s)

Susan Woodward, 2003: ‘The Yugoslav model of socialism was an attempt to combine socialist ideals and policies at home with openness to the world economy…’

Darko Suvin, 2015: Yugoslavia was a country of ‘capitalism without capitalists’

Introduction of self-management was followed by the rise of mass consumerism in late 1950’s after the Party requested easier access to commodities/goods for citizens.

4 “Nowadays, the former socialist system is alternatively viewed as emancipatory, oppressive, and everything in between–a contested object of memory subject to political manipulation.

“In the post-Yugoslav cultural context, capitalism becomes a restructured feeling: from an optimistic, if ambivalent “love affair” with it during Yugoslav times, it becomes recalibrated into a harsh reality whose promise of material security appears increasingly unattainable (except for a select few). In the process, socialism itself now becomes a renewed object of yearning for some, whether through the well-documented practices of cultural nostalgia, or through the intellectual leftist efforts at rehabilitating the belief that socialism is the only viable alternative to neoliberal capitalist exploitation.”

6 economic and cultural hybridity: ‘Everything here is like somewhere else.’ [Nešto izmedju, 1983 film]

7 Caroline Humphrey, 2002: “there is never a sudden and complete emptying of social phenomena followed by their replacement with new ones” –> “post-Yugoslav “limbo” of the unfinished past comprised of a unique set of circumstances” including “neoliberalism, war, ethnonationalism, and the ongoing political struggle over cultural memory…”

“Post-Yugoslav spaces are postsocialist, transitional regions…but also a post-conflict zone…[and] partially integrated into the capitalist…European Union….cultural memory of socialism…is often too easily reduced to a caricature in the postsocialist public discourse and politics. In the post-Yugoslav times, we are witnssing a schizophrenic situation where the memory of socialism not only exists parallel to [late capitalism] but also significantly shapes the future in the region….the spectre of socialism haunts the future of the region, reflecting and producing disillusionment with the neoliberal present, and an active rethinking of the shared past.”

Tatjana Jukić. “Fictions of Crime in a State of Exception.”

44 Political economy profiled or even determined “the Yugoslav imaginary of the communal.”

Self-management sent the message that it was how the revolution persisted in socialism.

45 Self-management also “kept mobilizing the self as psychopolitical, in the position where rule, reign, and law gave way to management, critique, and contingency.”

Yugoslav exceptionalism (singularity of hybrid market socialism and leadership of Non-Aligned Movement) vs state of exception (separateness, from both the West and the East)

70 “culturalized image of a gastarbeiter as a bizarre, grotesque individual whose cultural taste is characterized by kitsch and eclecticism, who does not fit in the acceptable cultural norms of either the society he or she left nor of the one she or he came to” vs the reality of migrants with a harsh life, hard work, anxieties from separation from country and family

71 In post-Yugoslavia, 1980’s are canonized as the Golden Age of Yugoslav music, with rock, New Wave, and alternative music, while newly composed folk music is ignored as kitsch with little cultural and aesthetic value made for consumption and market by superficiality, conformity, and ignorance.

73 Miners and kafana singers shared a liminality conditioned by middle class’s desires and needs; they each needed each other, the former the latter to justify their existence, the latter the former to perceive their own higher status.

Breda Luthar and Maruša Pušnik. “The Restoration of Capitalism After Yugoslavia: Cultural Capital, Class and Power.”

95 “In a postsocialist context, imbued with an egalitarian legacy, nationalism becomes the means by which capitalist discourses mobilize popular support and re-articulate the problem of class.”

107 Susan Woodward, 2003: In Yugoslav socialism the workplace was ‘the centre of one’s social universe’ which reflected “the central social, political, and ideological role of work in Yugoslav socialism” as “foundational principles of social order”

113 “The specific social organization of the socialist federation, based on “work collectives” and (later) “organizations of associated labor,” put work at the center of one’s social experience.”

114 Branko Horvat, 2003: Postsocialist transition is ‘the regression from self-management to the predatory capitalism of the Yugoslav monarchy.’ i.e. temporally it’s a “return, restoration, and repetition.”

173 Yugoslavia = “the land of perpetual socialist re-invention [constant reforms aiming to establish the Yugoslav way between West and East and mitigate ethnic tensions followed by war, capitalism, and nationalism, which are much less, if at all, future oriented]

175-176 Apartment buildings were not intended to foster collective identity but rather represent the most cost-efficient and hygienic way of housing the working class and promote the adoption of a modern life style.

178-179 Between 1950 and 1970, share of social housing (apartment buildings) in total housing declined while (demand for) private home constructions increased, while costs were transferred to consumers as part of market socialism. Propaganda described this as proof of rising standards whereby housing no longer needed to be provided as a social good and consumers could spend their wages on whatever housing they wanted.

188 Market socialism promoted not universal access to housing but right to consumer choice.

199 Consumerism was boosted by trips to Italy, television/film, radio, especially in areas close to the border.

“more than anything else, distance from the coast was the key indicator of the level of economic development which any given locality enjoyed.” – creation of tourist infrastructure from the mid-1950s, sobe from the 1960s

Mitja Velikonja. “Yugoslavia After Yugoslavia: Graffiti About Yugoslavia in the Post-Yugoslav Urban Landscape.”

333 Most pro-YU graffiti “refer to the ideological antagonism of socialist federalism versus nationalism.”

Second contrast is between Tito and national figures.

Third is fascism vs anti-fascism:

338 Some graffiti refer exclusively to the past, contrasting it with the present. Pro and anti-YU (former Yugoslavia as state and ideology vs ethnonationalism/liberalism) opposition continues unresolved.

Pro-YU graffiti is a form of resistance.

339 Prevalence of pro-YU graffiti means that the side is marginalized in mainstream culture. Graffiti is an available medium of expression.

340 Political graffiti from both sides are evaluations of the past. This will intensify.